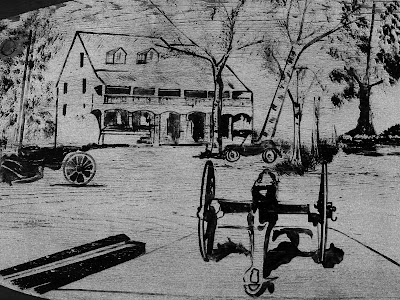 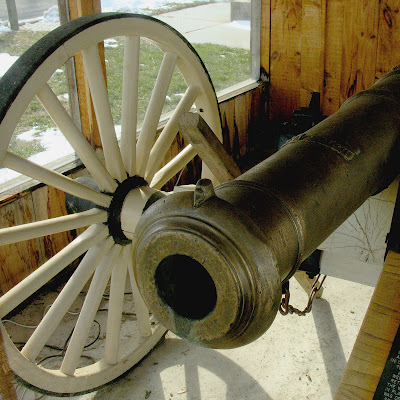 
Behind a cluster of evergreens on the tiny grass plot in front of the township hall is a BRONZE CANNON, bearing Latin inscriptions, the date 1763, and the Austrian coat of arms. It was captured from its original owners by the French; from the French by the British, and from them by local troops during the Revolution. 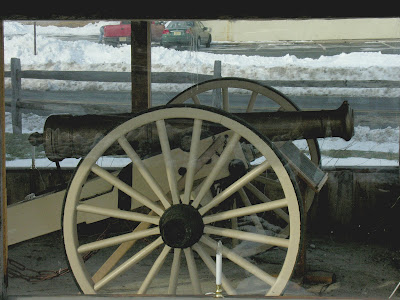 It's not easy to spot the cannon as you drive around the circle at the center of this little crossroads town at the intersection of Harding Highway (US route 40) with Old Tavern Road, the Pole Tavern -- Elmer Road, and the Bridgeton Pike.  It's enclosed in a small wood and plexiglas shed in front of the Upper Pittsgrove Township Municipal Building. 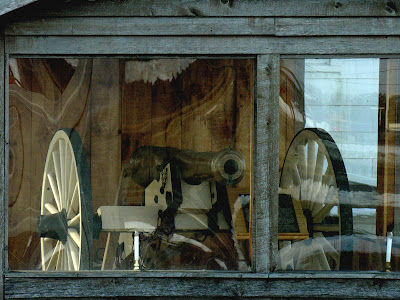 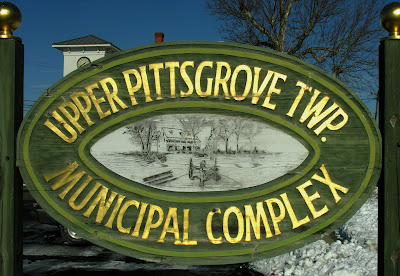 The cannon was enclosed as part of an Eagle Scout project in 1994. 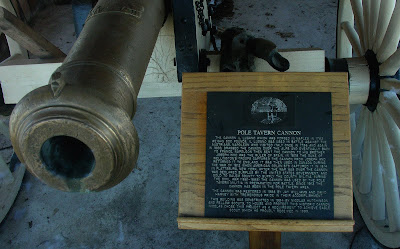 The sign tells the winding tale of the cannon's travels from 18th century Italy, through the War of 1812 and the Civil War to present day Pole Tavern/Pittsgrove, New Jersey.

THE CANNON IL LUGANO WHICH WAS FORGED IN NAPLES IN 1763 WEIGHS 800 POUNDS. IL LUGANO WAS USED IN BATTLE AGAINST THE AUSTRIANS. NAPOLEON WHO VISITED ITALY ONCE IN 1796 AND AGAIN IN 1800 DRAGGED THE CANNON OVER THE ALPS AND EVENTUALLY BACK TO FRANCE. NAPOLEON THEN SENT THE CANNON TO HIS BROTHER JOSEPH WHO WAS THE RULER OF SPAIN. IN 1808 THE DUKE OF WELLINGTON'S TROOPS CAPTURED THE CANNON FROM JOSEPH AND RETURNED IT TO ENGLAND. IT WAS THEN USED IN CANADA DURING THE WAR OF 1812 WHEN AMERICAN COLONISTS CAPTURED IT IN 1814 IN PLATTSBURG, NEW YORK. AFTER THE WAR WAS OVER THE CANNON WAS DECLARED SURPLUS BY THE UNITED STATES GOVERNMENT, AND SOLD TO SALEM COUNTY TO SUPPLY THE COUNTY MILITIA. DURING THE CIVIL WAR (1861-1865) THE CANNON WAS USED BY THE POLE TAVERN MILITIA IN PREPARATION FOR BATTLE. SINCE l913 THE CANNON HAS BEEN IN THE POLE TAVERN AREA.

THE CANNON WAS RESTORED IN 1986 BY JAY WILLIAMS AND DAVID HARVEY WITH TREMENDOUS PRIDE IN THEIR ACCOMPLISHMENT.

THIS BUILDING WAS CONSTRUCTED IN 1994 BY NICOLAS HUTCHINSON AND FELLOW SCOUTS TO HOUSE AND PROTECT THIS HISTORIC CANNON. NICOLAS CHOSE THIS PROJECT AS A REQUIREMENT TO ACHIEVE EAGLE SCOUT WHICH HE PROUDLY RECEIVED IN 1995.

The cannon was more visible to travellers in the early 20th century when this photo of a girl and her dog was taken. (This photo is displayed on the wall of the Point-40 Diner.) 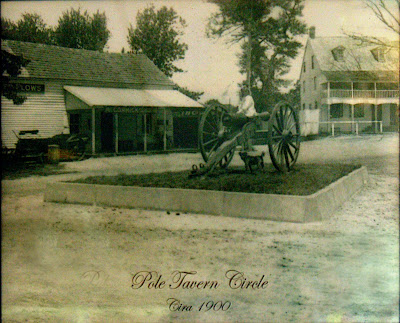 The old tavern from which the town got its name is clearly visible behind the cannon. In colonial times, it was called Pole Tavern because of the liberty pole erected in front of it. The automobile-era successor to the old tavern was the Circle Diner -- "Come on in and eat, before we both starve!" This old photo shows the Pole Tavern traffic circle on Route 40 with the Circle Diner in the foreground and the municipal building in the lower right corner. 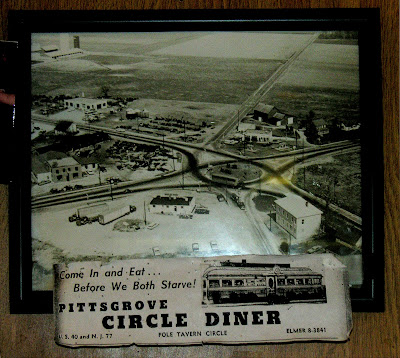 If you look very closely, the old cannon is visible in front of the municipal building. 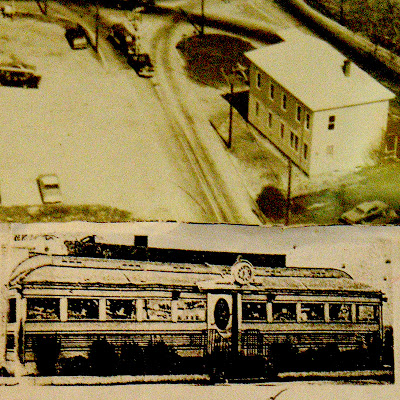 The Point-40 Diner built in the 70's is the current heir to the hospitality tradition begun with the Pole Tavern. 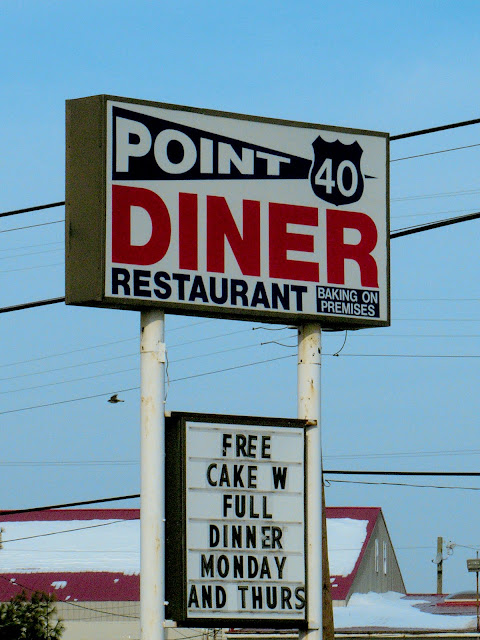 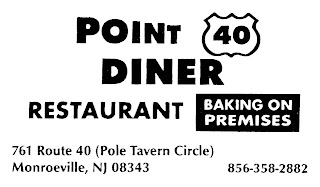