A Man Who Freed Himself ... 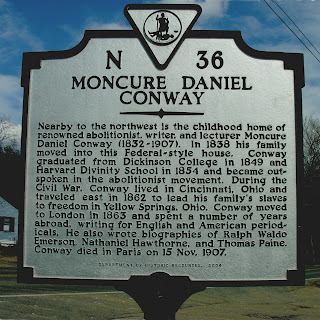 Nearby to the northwest is the childhood home of renowned abolitionist, writer, and lecturer Moncure Daniel Conway (1832-1907). In 1838 his family moved into this Federal-style house. Conway graduated from Dickinson College in 1849 and Harvard Divinity School in 1854 and became outspoken in the abolitionist movement. During the Civil War, Conway lived in Cincinnati, Ohio and traveled east in 1862 to lead his family’s slaves to freedom in Yellow Springs, Ohio. Conway moved to London in 1863 and spent a number of years abroad, writing for English and American periodicals. He also wrote biographies of Ralph Waldo Emerson, Nathaniel Hawthorne, and Thomas Paine. Conway died in Paris on 15 Nov. 1907. 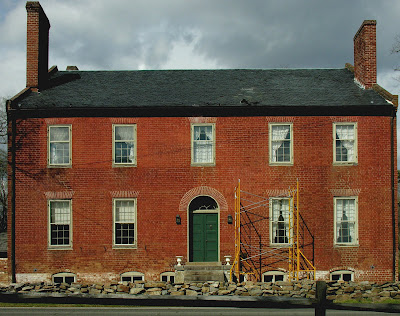 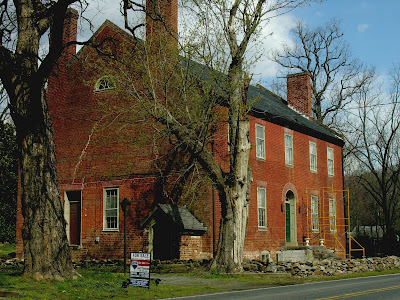 Conway was born into a Methodist slave-holding Virginia family. He became a prominent free-thinking abolitionist Unitarian writer after attending Harvard Divinity School in 1854. He lost his post as Unitarian minister in Washington, DC, because of his radical views and migrated to Cincinnati, Ohio.

from The Biographical Dictionary of America 1906 by Rossiter Johnson

The World's Work published this photo of Moncure D. Conway in Decemter 1904. 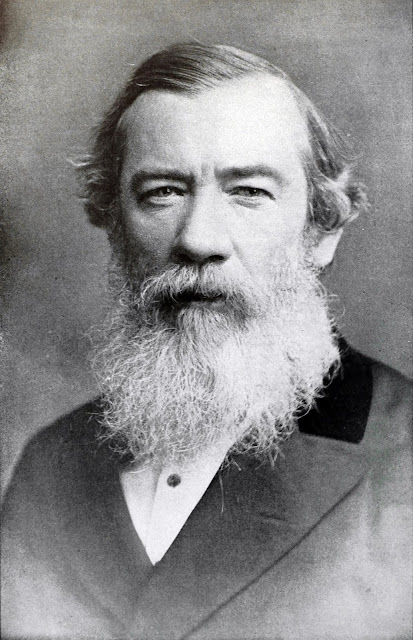 This house became an Underground Railroad landmark in 2004. The marker calls Conway "the only descendent of one of our nation's Founding Fathers to actively lead escaping slaves to freedom, thereby taking the initial steps to correct what was not accomplished in the Constitutional Convention." Moncure Conway was a direct descendant of Thomas Stone, one of Maryland's three signers of the Declaration of Independence. 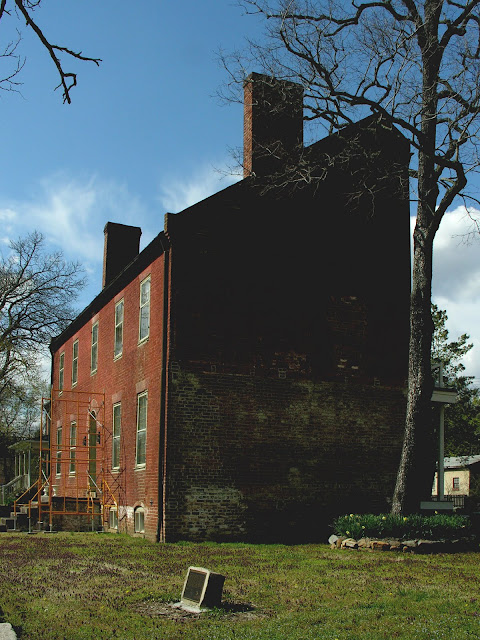 In 1862, Federal troops arrived in Falmouth. Conway tells in his Autobiography how his portrait and his reputation saved the house.


When the Union army under General McDowell entered Falmouth they found the village deserted by the whites. My father was in Fredericksburg, and my two brothers far away in the Confederate ranks. The house was left empty and locked up, the house servants remaining in their abode in the back yard. Yet as the Union soldiers were filing past a shot was fired from a window of Conway House, or from a corner of its yard, and a soldier wounded. It was never known who fired the shot; our negroes assured me that the house was locked and watched. The Union soldiers, alarmed and enraged, battered down the doors, and, finding no one, began vengeance on the furniture. It happened, however, that in my mother's bedroom was hung a portrait of myself, and this caught the eye of a youth who had known me in Washington. He cried to his furious comrades to stop. The servants were called in, and were much relieved when they found that it was to speak of my portrait. Old Eliza cried, "It's mars' Monc the preacher, as good abolitionist as any of you!"

It was some consolation to me that, though long regarded as the black sheep of the family, my portrait saved Conway House from destruction, for that was contemplated. The house was of brick, and the largest in Falmouth; it was made a hospital, and the seriously wounded soldier was its first inmate… It was in Conway House hospital that Walt Whitman, for a time, nursed the suffering soldiers.

Enslaved African-Americans took advantage of the Union presence to escape from their masters as this Trail to Freedom marker indicates. 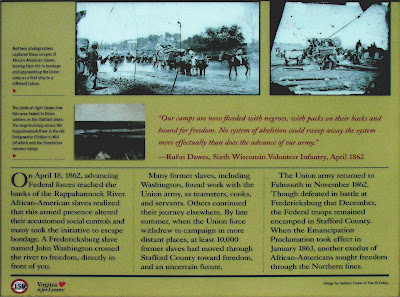 Moncure Conway's family slaves took the same opportunity. While Conway was in Washington plotting to travel to Falmouth to carry his father's slaves to freedom, he discovered they had already escaped to Georgetown. Conway accompanied them on a dangerous train trip to Ohio. He, and they, braved hostile crowds in Baltimore. In order to convince a recalcitrant railroad agent in Baltimore to allow him on the train with 31 escaped black people, he showed the agent a paper saying that these were actually his father's slaves so he had the right to travel with them wherever he wished, even into the free state of Ohio. His charges formed a colony of freed people along the Miami river in Ohio that is still a recognizable African American community.

This federal house, built in 1807, has a "flounder" roof giving it the appearance of being cut in half. 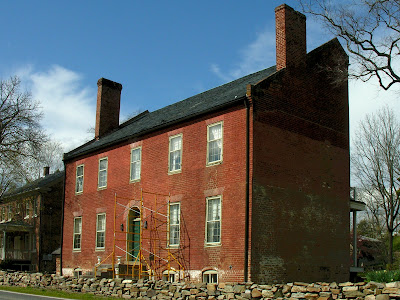 This plaque announcing that Conway house is on the National Register of Historic Places was sponsored by The 2nd Regt. U.S. Sharpshooters Re-Enactors. 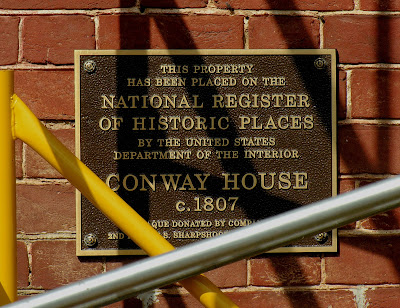 The text of the underground railroad marker makes the point that though Conway is known for helping his family's slaves escape to freedom, his real accomplishment was freeing himself from the intellectual and moral environment he was born into. 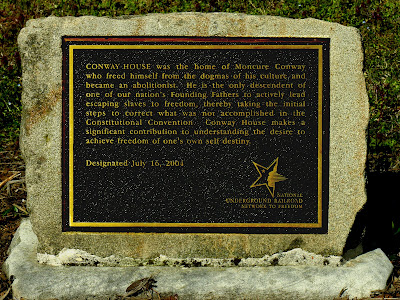 Conway House was the home of Moncure Conway who freed himself from the dogmas of his culture and became an abolitionist. He is the only descendent of one of our nation's Founding Fathers to actively lead escaping slaves to freedom, thereby taking the initial steps to correct what was not accomplished in the Constitutional Convention. Conway House makes a significant contribution to understanding the desire to achieve freedom of one's own self destiny.