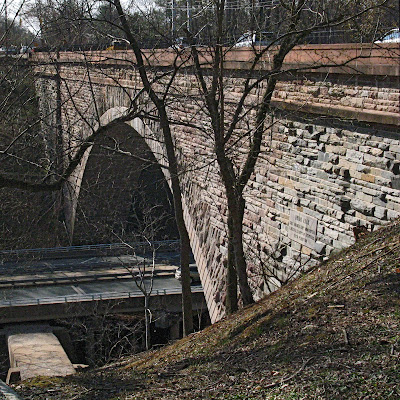 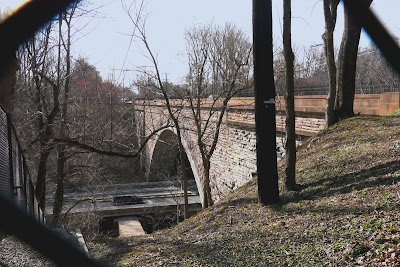 The Union Arch, as the bridge was originally known, was built in 1857 by Lieutenant Montgomery Meigs to carry the Washington Aqueduct across Cabin John Creek, and was finished in 1864. It was the longest stone masonry arch in the world until 1903. It is still the longest in the U.S.  This picture comes from Scientific American,  July 1881. 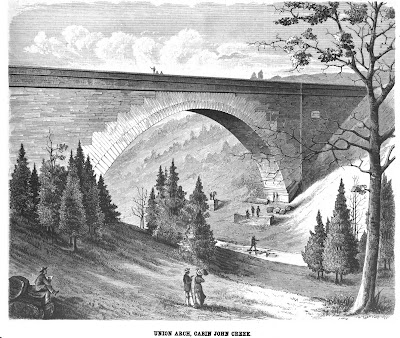 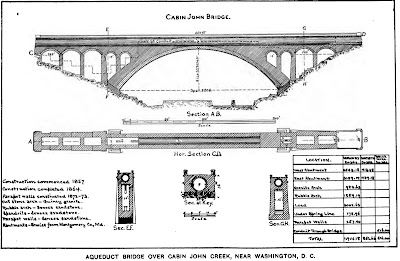 The bridge is both a National Historic Civil Engineering Landmark... 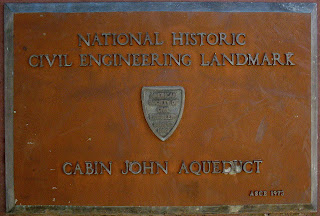 ...and an American Water Landmark. 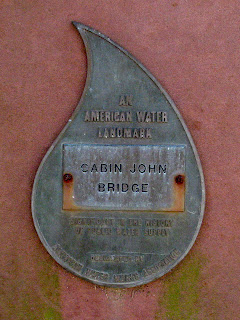 The Cabin John Arch is represented on the upper right corner of the Montgomery County ice-cream plate in the USS Maryland Silver Service on display in The State House in Annapolis. 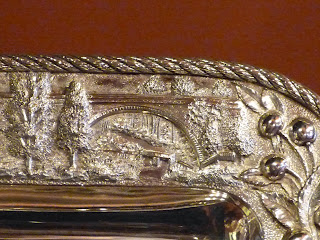 The Aqueduct, begun in 1853, is a nine-foot brick pipeline carrying water from the Potomac at Great Falls to Washington. Before the aqueduct was completed, Washington depended on local springs for drinking water. Jefferson Davis was the Secretary of War when the Aqueduct was planned and begun, and his name was carved on a tablet on the western abutment of the bridge. When Davis became the president of the Confederacy during the construction of the bridge, his name was removed from the tablet. William R. Hutton, former chief of engineers of the Aqueduct, tells the story in the American Farmer Magazine, 1899.

"In June, 1862, at the request of the Secretary of the Interior, the Hon. Caleb Smith, to whose department the aqueduct had just been transferred, I accompanied the secretary and a number of members of Congress on a tour of ;inspection of the aqueduct by way of the canal. Opposite Cabin John's Bridge several of the party disembarked and walked to the bridge for a nearer view. Returning in hot haste, 'Do you know, 'said the Hon. Galusha Crow, to the Secretary, 'that d--d rebel Meigs has put Jeff. Davis' name on the bridge.' Turning to me the Secretary said: 'The first order I give you is to cut Jeff. Davis' name off the bridge. A few days later I was appointed Chief Engineer of the aqueduct. Not taking seriously of the Secretary's remark I did nothing in the matter. A week later Mr. Robert McIntyre, the contractor, arrived to resume his work upon the bridge and called to pay his respects to the Secretary. The Secretary said to him that they had put Jeff. Davis' name on the bridge; he wished he would cut it off. 'With the greatest pleasure, Mr. Secretary.' was the reply; and the contractor's first work was to remove Mr. Davis’ name."

After the War southerners lobbied hard to have Davis's name restored to the bridge. 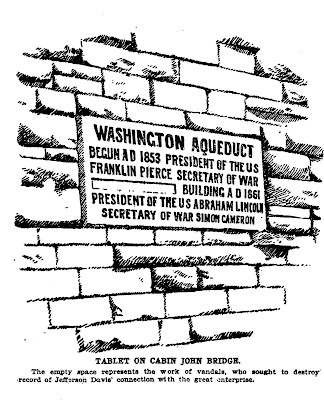 In 1908, Theodore Roosevelt ordered Davis's name restored. James Buchanon Horne carved out the whole inscription and re-carved it to restore Davis's name.  The following pictures are from The Restoration of the Name of Jefferson Davis on the Cabin John Bridge by Mrs. John Landis Robinson, 1909. 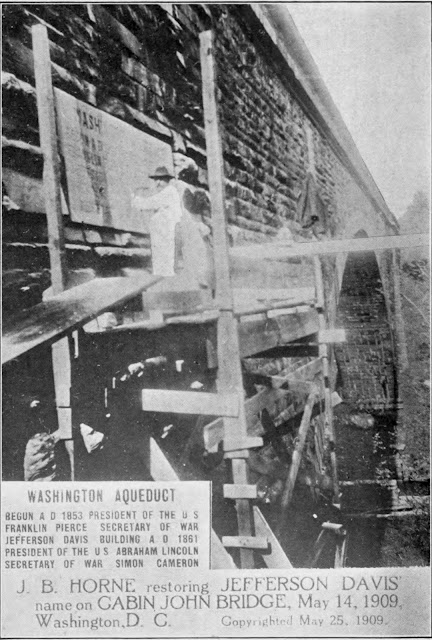 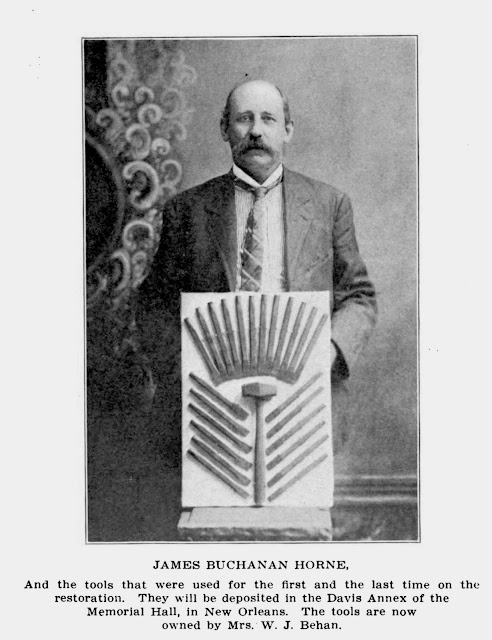 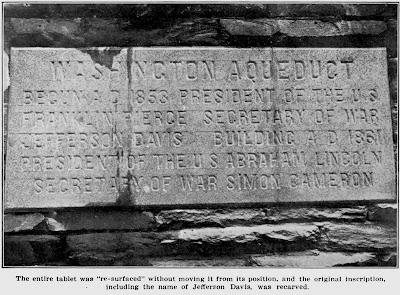 The Cabin John Bridge, a tourist attraction in the late 19th and early 20th century, supported a hotel and trolley line. The Cabin John Hotel was run by John and Rosa Bobinger. John Bobinger was a stone mason on the bridge project. It's believed that he's the one who actually struck Davis's name from the bridge. His wife Rosa ran a snack stand during the construction. They moved on to running the resort hotel. 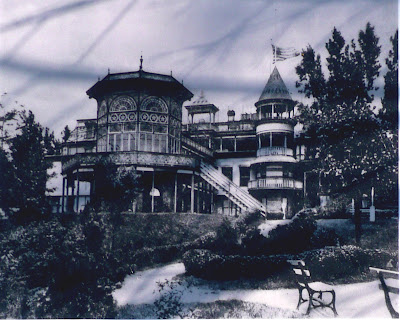 Guests rode out to the Hotel on a trolley line that stopped on the east side of the Cabin John gorge and walked over an elaborate iron bridge to the Hotel. The path of the trolley line can still be seen running along MacArthur Boulevard. 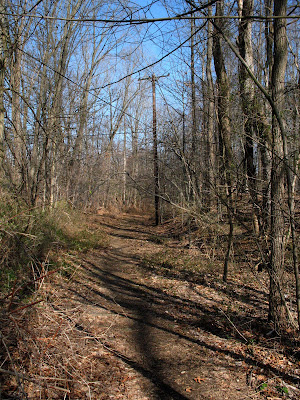 The remnants of the eastern abutment of the foot bridge is still visible in the tangled weeds along the Cabin John trail. 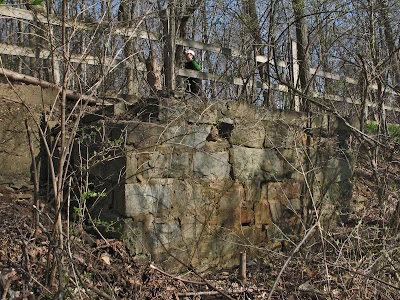 This ad for the hotel from the Washington Times in 1902 invited people to have dinner at the Cabin John Bridge Hotel on Decoration Day. At that time the hotel was run by John Bobinger's sons William and George. 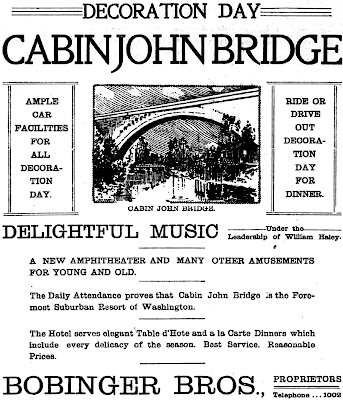 This small brick building is the only remnant of the old hotel. It was the gas house for the hotel in the gas-light era. 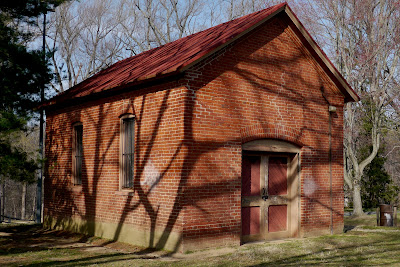 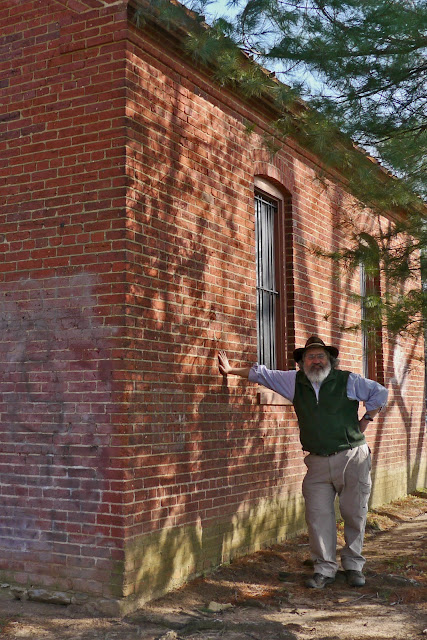 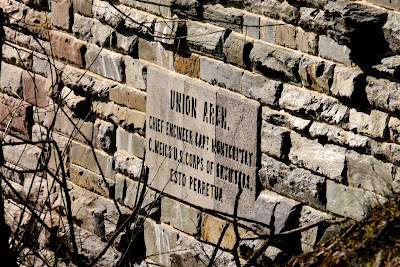