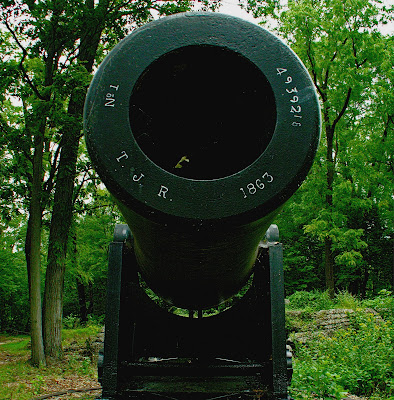 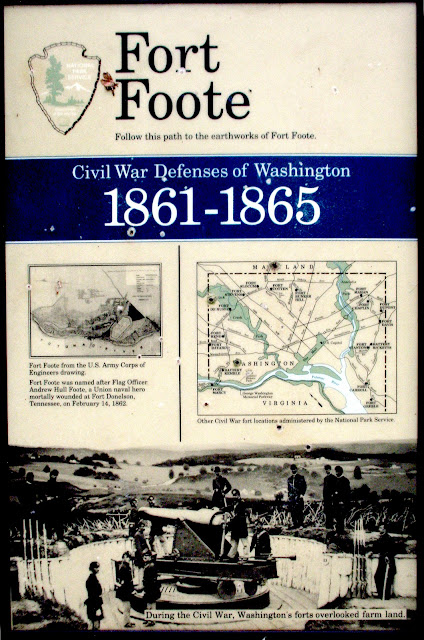 Along the east bank of the Potomac, about six miles below Washington, there are remnants of earth work, concrete bunkers and two huge cannons. This Civil War era fort is the best preserved of Washington's Circle of 60 Forts which are now under the auspices of the National Park Service. Fort Foote was built in 1863 by the 9th New York Heavy Artillery under the direction on Lt. Col. William H. Seward, Jr., the son of William H. Seward, the Secretary of State. NPS signage fully interprets this site. 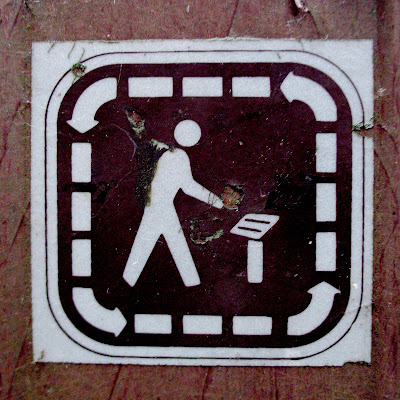 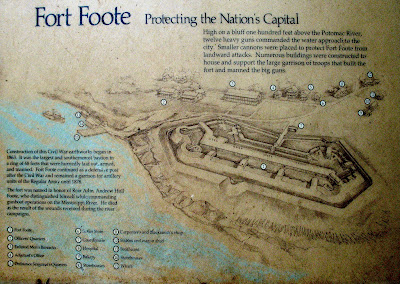 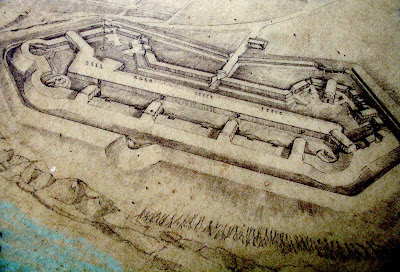 High on a bluff, a hundred feet above the Potomac River, twelve heavy guns commanded the approach to the city. Smaller cannon were placed to protect Fort Foote from landward attack. Numerous buildings were constructed to house and support the large garrison of troops that built the fort and manned the big guns.

Construction of this Civil War earthworks began in 1863. It was the largest and southernmost bastion in a ring of 68 forts that were hurriedly laid out, armed and manned. Fort Foote continued as a defensive post after the Civil War and remained a garrison for artillery units of the Regular Army until 1878.

The fort was named in honor of Rear Adm. Andrew Hull Foote, who distinguished himself while commanding gunboat operations on the Mississippi River. He died as a result of wounds received during the river campaigns. 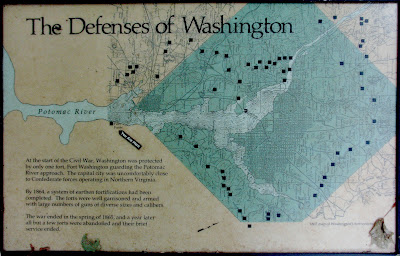 The Defenses of Washington

At the start of the Civil War, Washington was protected by only one fort, Fort Washington guarding the Potomac River approach. The capital city was uncomfortably close to Confederate forces operating in Northern Virginia.

By 1864, a system of earthen fortifications had been completed. The forts were well garrisoned and armed with large numbers of guns of diverse sizes and calibers.

The war ended in the spring of 1865, and a year later all but a few forts were abandoned and their brief service ended. 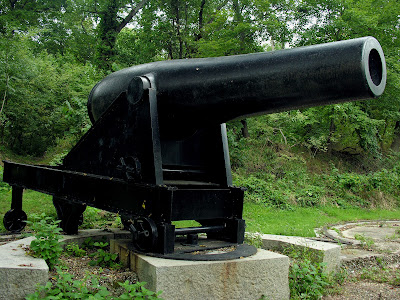 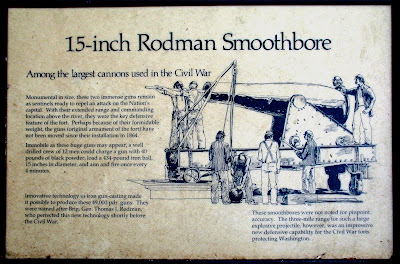 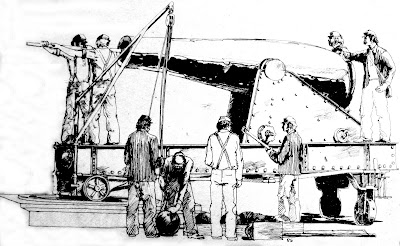 15-inch Rodman Smoothbore: Among the largest cannon used in the Civil War

Monumental in size, these two immense guns remain as sentinels ready to repel an attack on the Nation's capital. With their extended range and commanding location above the river, they were the key defensive feature of the fort. Perhaps because of their formidable weight, the guns (original armament of the fort) have not been moved since their installation in 1864.

Immobile as these huge guns may appear, a well drilled crew of 12 men could charge a gun with 40 pounds of black powder, load a 434-pound iron ball, 15 inches in diameter, and aim and fire once every 4 minutes.

Innovative technology in iron gun-casting made it possible to produce these 49,000 pdr. guns. They were named after Brig. Gen. Thomas J. Rodman, who perfected this new technology shortly before the Civil War.

These smoothbores were not noted for pinpoint accuracy. The three-mile range for such a large explosive projectile, however, was an impressive new defensive capability for the Civil War forts protecting Washington.

These big guns were were objects of wonder in their day. President Lincoln and his cabinet visited the fort to see demonstration firing of the guns, eat peaches and return on the steamer General Hooker. Today these mammoth re-mounted cannons sit incongruously in a wooded park popular with dog walkers. 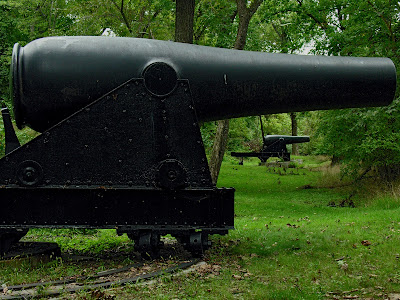 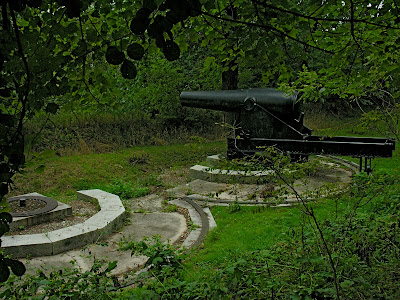 Signs posted on the bulletin board at the entrance to the park ask and answer four questions about the old fort.

Why was the fort built here?

Most of the forts that were built encircling Washington, D.C., during the early days of the Civil War, were earth and log structures, designed to be temporary field fortifications. Their purpose was to resist the attack of ground forces, such as infantry, cavalry, and artillery. But Fort Foote was built to protect Washington from a naval attack. Fort Washington, on the Potomac 16 miles south of Washington, was considered too far away to be adequately supported. So this site, just 6 miles south of Washington on Rozier's Bluff, 100 feet above the river, was considered an ideal location.

When did historic things happen here?

The fort was completed in the fall of 1863. It was named for Rear Admiral Andrew H. Foote, who died on June 26, 1863, after distinguishing himself in the actions against Confederate, forts on the Mississippi River. The fort saw no action during the Civil War, but President Lincoln and Secretary of State William Seward did visit the fort on August 20, 1863. Soldiers were stationed at Fort Foote even after the Civil War until 1878. Then the post was used for military training. After World War II, Fort Foote was transferred to the Department of the Interior. Today the park is a National Park service unit administered by National Capital Parks-East.

What was the fort like during the Civil War?

The front of the fort was over 500 feet long and the earth walls were 20 feet thick, and lined with wood. A central traverse ran the length of the fort and contained bombproof magazines and storage areas. Twelve cannons were placed on the walls of the fort: two 15-inch Rodman guns, four 200-pounder Parrott rifles, and six 30 pounder Parrott rifles. The garrison lived in frame buildings outside the fort. Typhoid and malaria were a constant threat. A 40-foot hospital was located at the post, and it came in handy, since sometimes half the garrison were on sick list at one time!

What can we see here today?

Today the area is a quiet place to enjoy nature. Take a hike and enjoy the view from the bluff. Explore what is left of the fort, and imagine what it was like when hundreds of soldiers lived and worked here. Examine the 15-inch Rodman guns on display. These were the largest cannons used during the Civil War. Each cost $9000. The gun barrel of a 15-inch Rodman weighs 50,000 pounds and is more than 15 feet long. 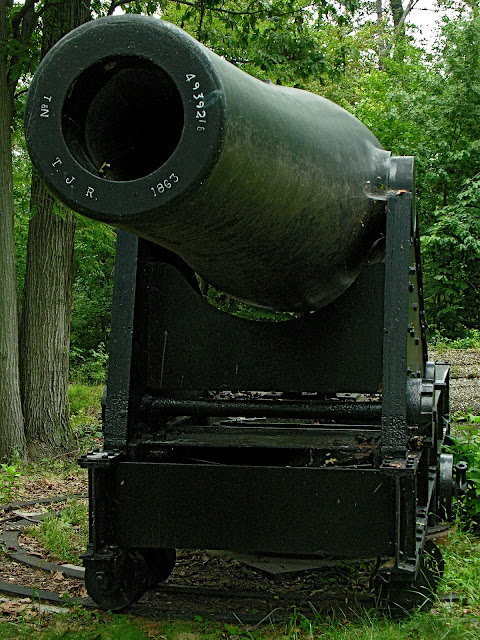