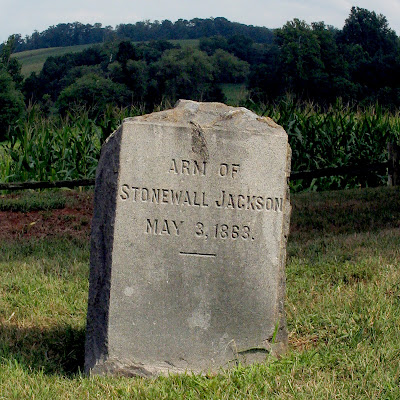 In May of 1863, Stonewall Jackson's chaplain, Beverely Tucker Lacy, buried Jackson's arm in the cemetery at his brother's summer home, Ellwood. The cemetery contains only the stone marker above and this NPS sign. 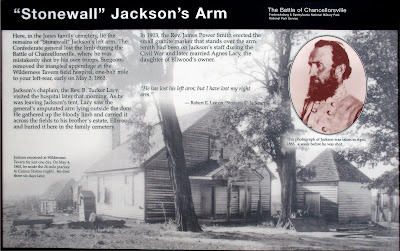 Here, in the Jones family cemetery, lie the remains of "Stonewall" Jackson's left arm. The Confederate general lost the limb during the Battle of Chancellorsville, where he was mistakenly shot by his own troops. Surgeons removed the mangled appendage at the Wilderness Tavern field hospital, one-half mile to your left-rear, early on May 3, 1863.

Jackson's chaplain, the Rev. B. Tucker Lacy, visited the hospital later that morning. As he was leaving Jackson's tent, Lacy saw the general's amputated arm lying outside the door. He gathered up the bloody limb and carried it across the fields to his brother's estate, Elwood, and buried it here in the family cemetery. 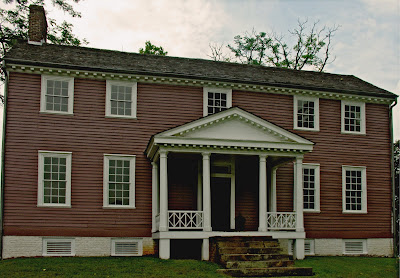 Ellwood has its own claims to historical importance. The house was built in the 1790's by William Jones. After his first wife, Lucinda Gorden Jones, died, he married her 16-year-old grandniece. He was 78 at the time. Their daughter, Betty Churchill Jones, was born in 1829. These portraits of William Jones and his daughter, Betty, appear on the wall at Elwood. 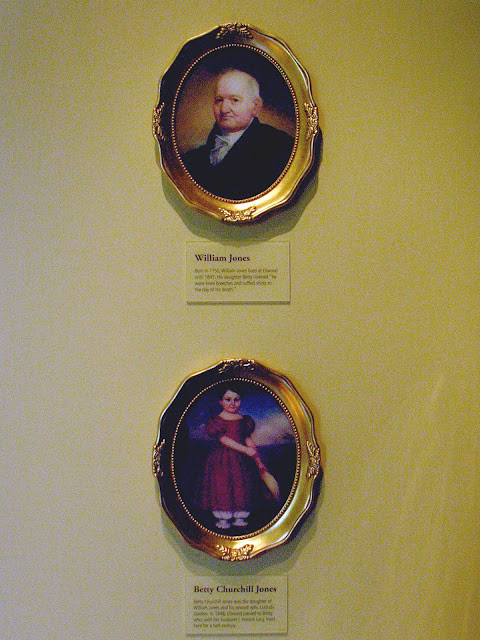 Betty Churchill Jones married James Horace Lacy in 1845. They lived here awhile until  they moved to the more pretentious Chatham near Fredericksburg. Thereafter they used Ellwood as a summer home. 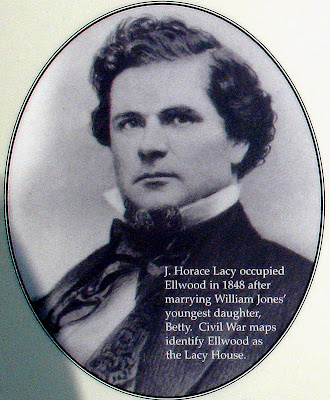 The Civil War
During the Civil War, Elwood was behind the Confederate lines at the battle of Chancellorsville and behind the Union lines in the Battle of the Wilderness. In May of 1864, a year after Jackson's arm was interred at Elwood, the house became the headquarters of Union General Gouverneur K. Warren. 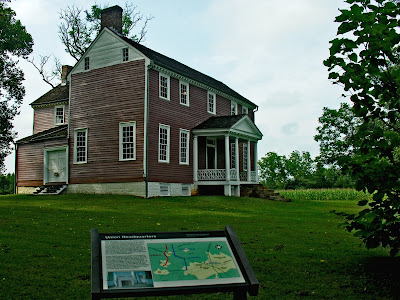 Ellwood stood in the midst of the Wilderness, a dark forbidding forest characterized by stunted trees and densely tangled undergrowth. When the Confederates challenged General Ulysses S. Grant's advance through the Wilderness on May 5, 1864, the Union commander made his headquarters just a few hundred yards north of here, along the Orange Turnpike (modern Route 20). For the next three days Ellwood, a quiet farm in a desolate region, suddenly found itself the center of national attention. Union Fifth Corps commander Gouverneur K. Warren occupied the first-floor room to the left of the front door throughout the battle. Here, on the evening of May 5, he received reports of staggering casualties from his chief surgeon. "It will never do to make a showing of such heavy losses," he observed. The bloodshed was just beginning. By the time the Army of the Potomac reached the James River, six weeks later, it had incurred more than 60,000 casualties.


Jackson's arm was already an object of curiosity in 1864 when Union soldiers dug it up and re-buried it.

Although the present house was not built until the 1790's, the area around Elwood played a part in the American Revolution, and the house participated in the early 19th century commemoration of the that war. The Marquis de Lafayette operated in this neighborhood during the campaign that led to the final victory at Yorktown and camped nearby. William Jones, who personally opposed the Revolution, sold Lafayette 700 pounds of beef. This Highway marker is on Constititution Highway, Rt. 20 at Brigadier Road, near the entrance to Ellwood. 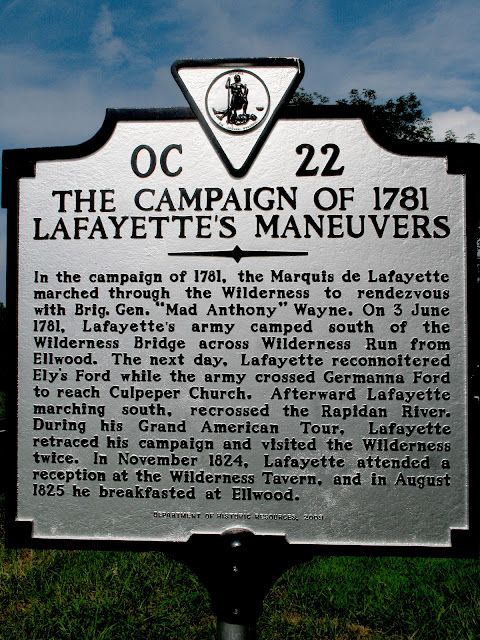 Revolutionary War cavalry general, Henry Lee III, "Lighthorse Harry," was the father of Robert E. Lee and a friend of William Jones' brother Churchill. Lighthorse Harry is believed to have written his memoirs in this upstairs room at Ellwood. 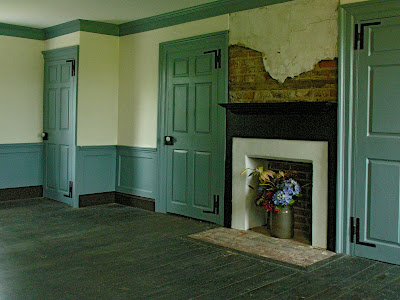 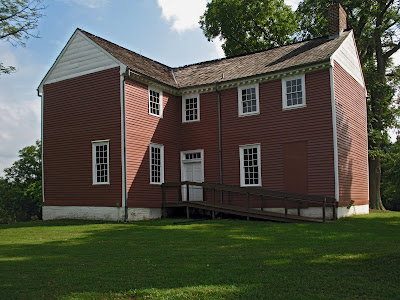 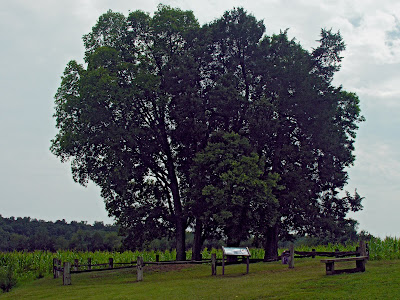 The sign quoted above explains the 1903 stone marker in the Elwood cemetery. 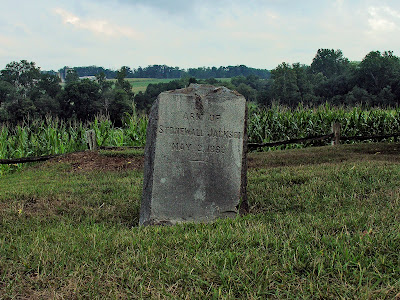 In 1903, the Rev. James Power Smith erected the small granite marker that stands over the arm. Smith had been on Jackson's staff during the Civil War and later married Agnes Lacy, the daughter of Ellwood's owner. 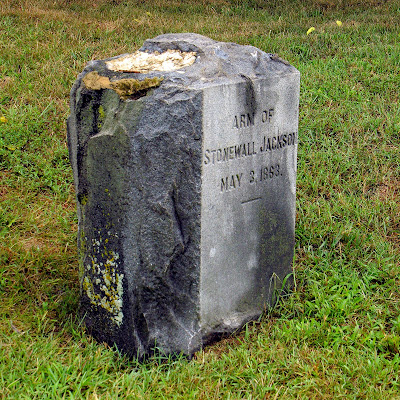 The cemetery at Ellwood contains no headstones although there are said to be 21 burials here. According to John Hennessy (Chief Historian, Fredericksburg/Spotsylvania), this lack of headstones is common in Virginia family cemeteries.


Oftentimes family knew pretty well for themselves where everybody was located in these cemeteries, and doing a headstone was a fairly expensive proposition and so, frequently they did not get done. That was the case here for sure. There were other military burials after, or during the Civil War in that cemetery, as far as we know. Those, at least three others were removed from that cemetery.

Jackson's arm is not actually located under the stone marker. Archaeology done in 1998 found that there were no burials within a five-foot circle of the marker. It is rumored that the Park Service knows where the arm is but won't tell. Hennesy states, "We know three things certainly about Jackson's arm.


--- Jackson's chaplain Beverley Tucker Lacy recovered the arm and buried it at Ellwood (his brother's home) on May 4, 1863.

--- Union soldiers dug up the arm during the Battle of the Wilderness in May 1864 and reburied it.

--- James Power Smith, one of Jackson's staff officers, who married the daughter of James Horace Lacy (the wartime owner of Ellwood), placed a marker for the arm in the Ellwood cemetery in 1903.

Virtually everything else you read or hear about the arm is legend or speculation, including the famous assertion that Smedley Butler excavated the arm during USMC maneuvers on the site in 1921, then reburied the arm in a metal box."


For more than 200 years, the shadow of a massive, 30-foot catalpa has been cast over the grounds of a Virginia countryside estate that served as the final resting place for Confederate general Thomas "Stonewall" Jackson's amputated arm, as headquarters for Union general Ulysses S. Grant, and as host to notables such as the Marquis de Lafayette.

The old  tree fell down in September of 2006. This photo of the fallen tree comes from Historical Woods. 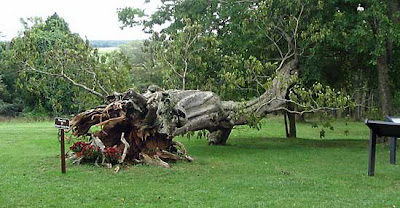 They display a vase carved from the wood of the Ellwood Catalpa. 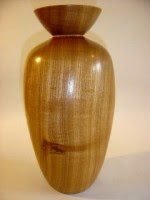 Some seeds from the bean-like catalpa pods of the old tree were sprouted in a Florida nursery to produce this youthful replacement catalpa at Ellwood. 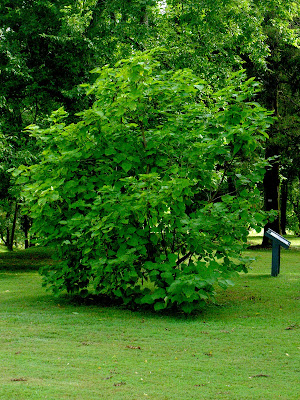 Ellwood Today
Today, Ellwood belongs to the National Park Service. It is interpreted by volunteers from the Friends of The Wilderness Battlefield. 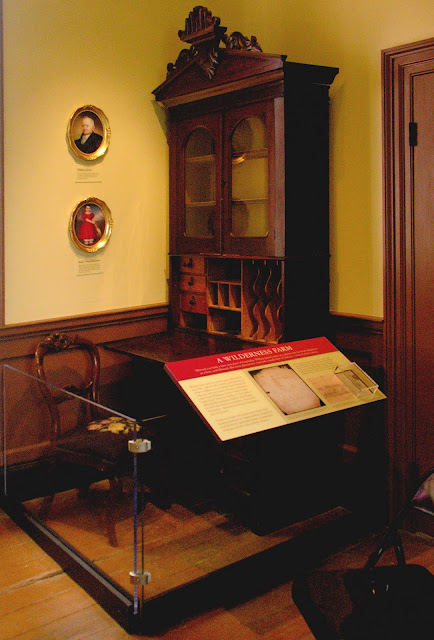 One focus of archaeology at Ellwood is to find the slave cabins that must have been here. Slavery at Ellwood is represented by this mural in a doorway. 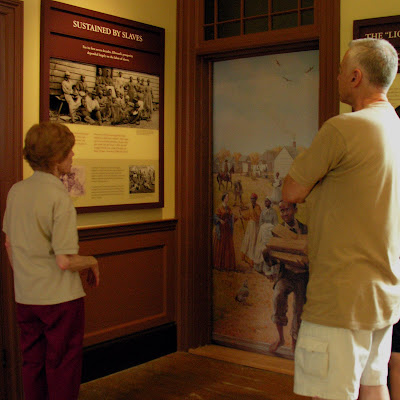 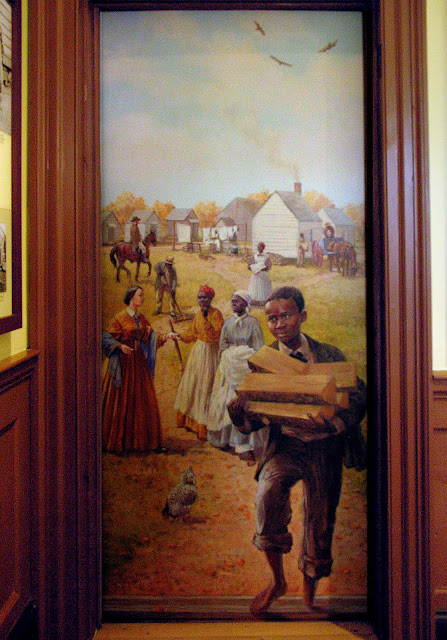 Thomas J. "Stonewall" Jackson is the second ranking figure in the pantheon of the Lost Cause. The fact that, in the mid-19th century, even a modest farming operation like Ellwood depended on the involuntary labor of over 100 enslaved human beings helps to cast Jackson's fame in perspective.
Posted by Allen Browne at 8:26 AM