The Northeast Corner of Maryland 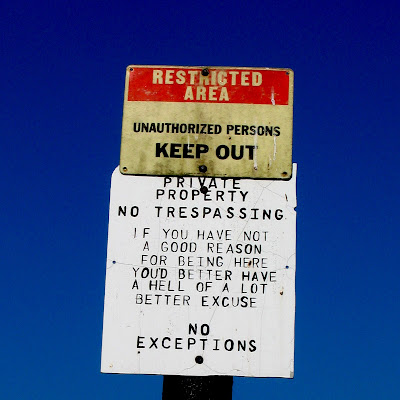 Mr. Larry Huntz, formerly Larry Monger, owns the land on which Maryland, Delaware, and Pennsylvania meet. He put up this sign to discourage partying teenagers. In 2007 he said he'd been robbed more than once. He is a somewhat irascible character but will happily let you visit if you ask first. (Corner Corner discloses all the Tri-State points including this one. Jack Parsell's book of Tri-State points covers this spot, too.)

Behind Mr. Huntz' metal pole barn, beside a stream that issues from a nearby spring, sits a granite stone with two P's and two M's on it and, under a P, the date 1849. 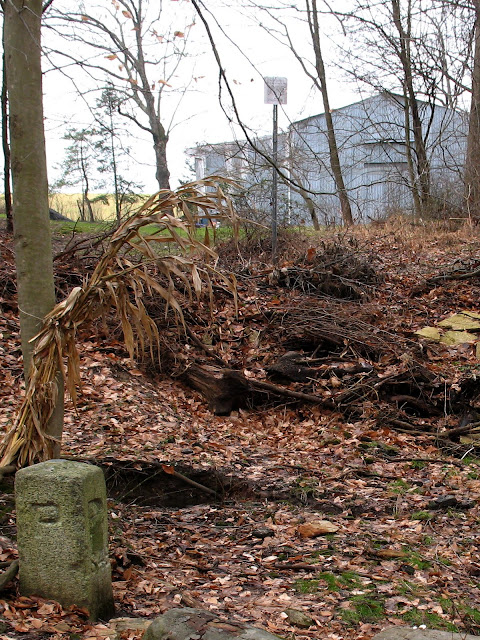 This stone marks the northeast corner of Maryland, the first (eastern-most) marker on the Mason-Dixon Line. 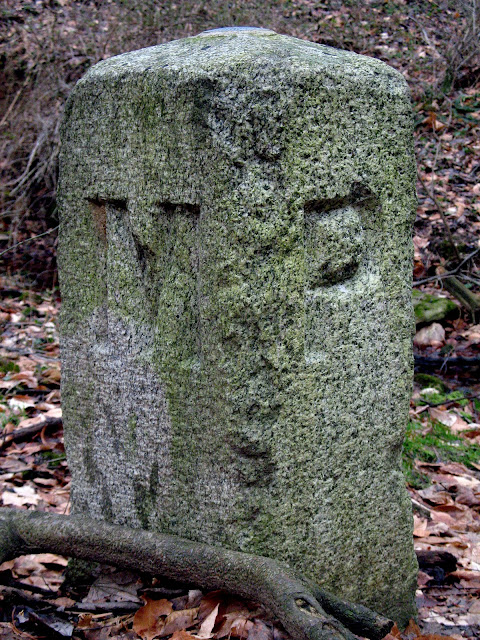 Charles Mason and Jeremiah Dixon did not place this stone. They arrived at this location in early June of 1765. They had traced a tangent line from the middle point of the Transpenisular Line to its tangent point with a 12-mile circle centered at the New Castle courthouse. This tangent line is the current west boundary of Delaware. From the tangent point they laid out a meridian due north to the point at which it intersected with the west line, the current northern boundary of Maryland. This point of intersection became the northeast corner of Maryland. Mason noted in his journal on June 6, 1765, "The Meridian from the Tangent Point crossed the Parallel at 2 Miles 79 Chains 27 Links, from the Point where we began to run the Parallel."

On June 7, Mason described placing a marker at this point:


Note: At the point of intersection of the Parallel of Latitude
and the Meridian from the Tangent Point, we placed a Post
marked W on the West Side and N on the North Side.
It stands in a meadow belonging to Captain John Singleton, 13 chains
50 Links to the North of the Road leading from Newark to the
Cross Roads and 25 chains 73 Links to the East of Little
Christianna Creek, also it is 49 chains 73 links to the East
of Mr. Rice Price's House.

This is point C on this postcard (North Light Studio, Hockassin DE, a gift from Mrs. Baldwin): 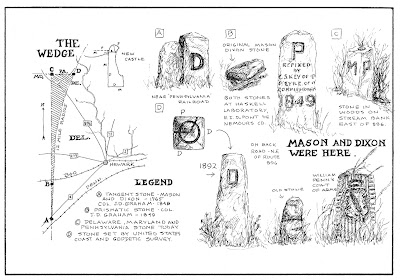 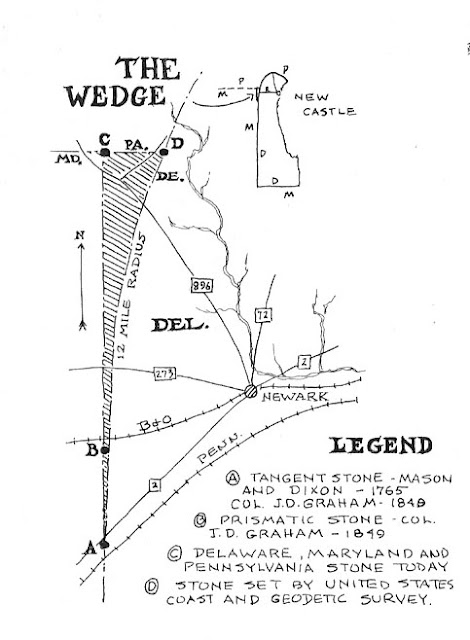 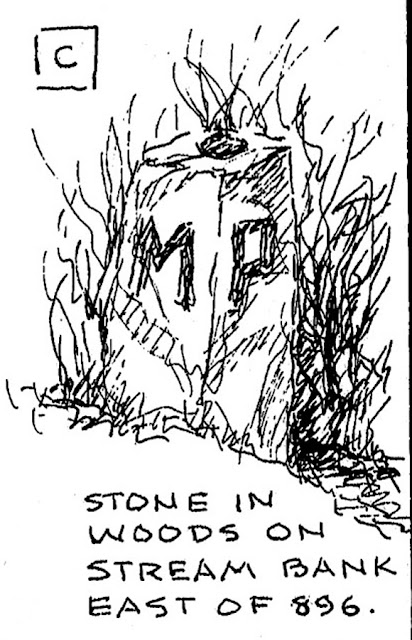 Mason and Dixon replaced their post with a stone marker soon after. When Lt. Col. Graham resurveyed the boundary in 1849, the stone had disappeared. Graham relocated the correct position and placed this stone to mark the place. When the spot was being excavated to place this stone, the original stone was found deeply buried. 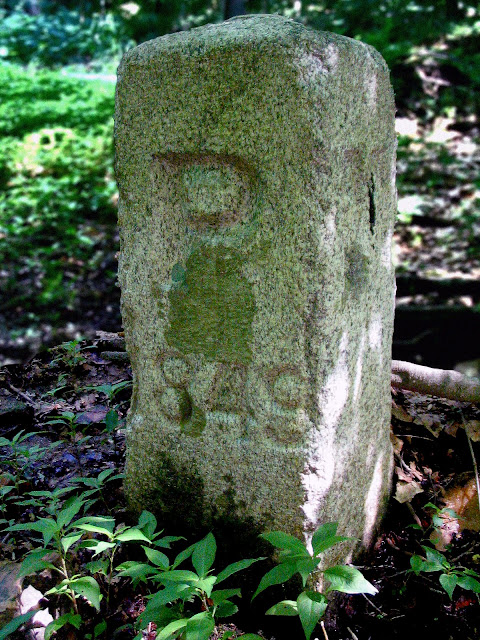 Graham apparently followed Mason and Dixon in putting a P on the east side of the monument. By Graham's time, Delaware was no longer part of Pennsylvania. Fuller suggests an entertaining way to enjoy the three-state point.


By standing on the south side of the stone, a little to the east of it, you can jump from Delaware clear across Maryland into Pennsylvania, provided you do not mind rolling down the hill at the end of the jump. (Fuller, ND, 200 Years and No Stone Turned)

But this is not precisely the Maryland-Delaware-Pennsylvania boundary intersection point. The USGS disk placed on top of the stone in 1935 points to another marker. 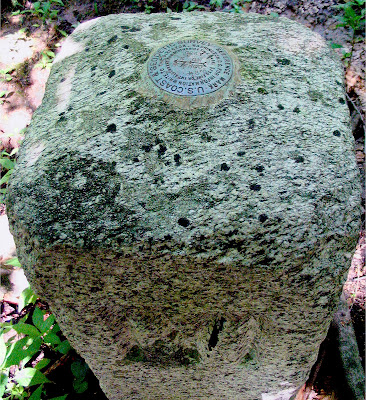 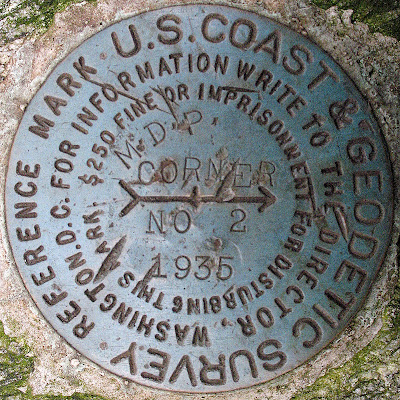 The precise corner marker is a concrete plinth 92 feet to the north across the small creek over a wooden footbridge.  Mr. Huntz says the bridge was built as an Eagle Scout project. 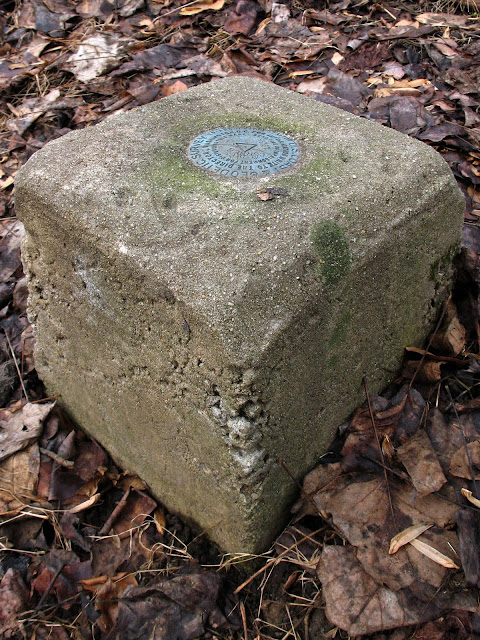 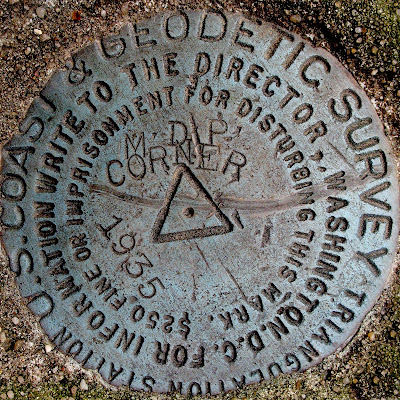 On a 1999 visit to this spot, I walked in through the back yard of Virginia and Dick Baldwins' home. Mrs. Baldwin invited me in for lemonade on that hot 4th of July and shared her considerable collection of information about this boundary stone with me. She gave me the post card shown above, a map of the Delaware Wedge and a Xerox copy of the Fuller's pamphlet "200 Years and No Stones Turned." She propelled my facination with the Mason-Dixon Line forward by a great leap. The Baldwins hold various holiday celebrations at the stone. The corn stalks in the second photo above are probably a remnant of a Baldwin Thanksgiving celebration.
Posted by Allen Browne at 10:58 PM