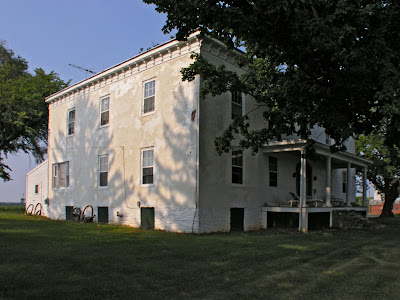 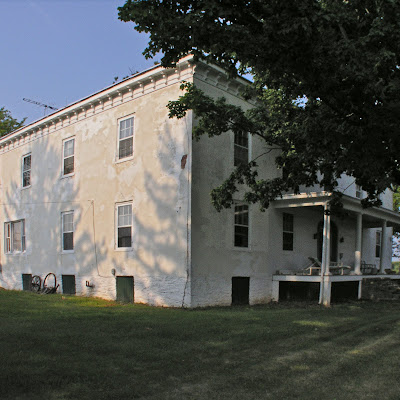 This Italianate house is just visible from Catoctin Highway (Rt. 15)  in the cornfields north of Frederick, Maryland. It was the birthplace of a Spanish American War hero and sits on the site of the home of Maryland's first elected governor. 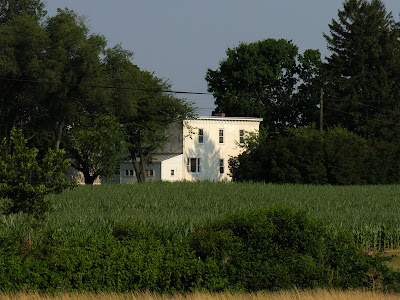 This marker alerts travelers on route 15 that this is an historic site by associating it with George Washington through Thomas Johnson, Maryland's first state governor, Revolutionary War General, and Supreme Court Justice. 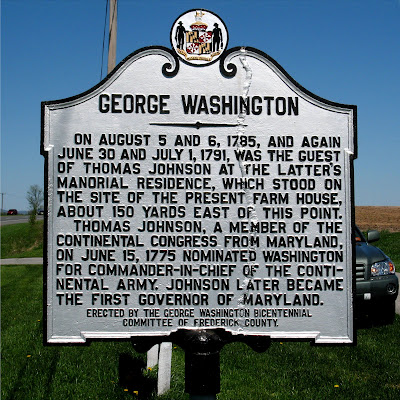 On August 5 and 6, 1785, and again June 30 and July 1, 1791, was the guest of Thomas Johnson at the latter's manorial residence, which stood on the site of the present farm house, about 150 yards east of this point.
Thomas Johnson, a member  of the Continental Congress from Maryland, on June 15, 1775 nominated Washington for Commander-in-chief of the Continental Army. Johnson later became the first governor of Maryland

Thomas Johnson bought this land in 1776 and built a three-story brick house here in 1780 after leaving office as Governor of Maryland.  He was appointed by Washington to the U.S. Supreme Court in 1790 and retired in 1791, leaving him with the shortest tenure of any U.S. Supreme Court Justice so far. He lived at Richfield until 1794 when he went to live with his daughter at Rose Hill in Frederick.

The 1,000 acre property belonged to William Goldsborough on May 22, 1818, when a midnight fire destroyed the mansion house. Goldsborough built a new two-story house in Italianate style between 1825 and 1830.  In 1836, Goldsborough died and the property went to John T. Schley. Winfield Scott Schley was born here in 1839.  The younger Schley became a naval officer and a hero of the Spanish American War. This postcard shows the home of  the "Hero of Santiago." 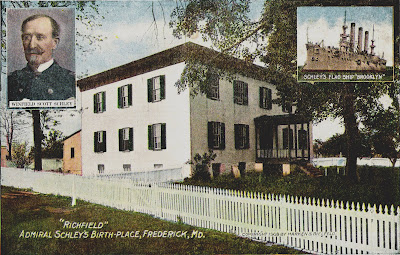 Leslie's Popular Monthly Magazine, in 1899, published this picture of Richfield in an article about Admiral Schley, "A Naval Hero of To-Day." 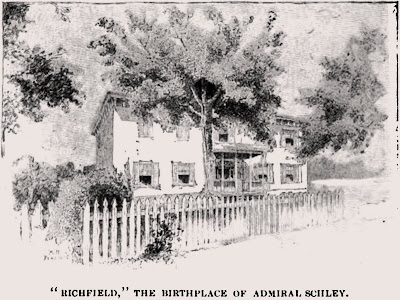 James W. Brooks motored by in 1929, and left this in the Washington Sunday Sun. The sketch is by Calvin A. Fader. 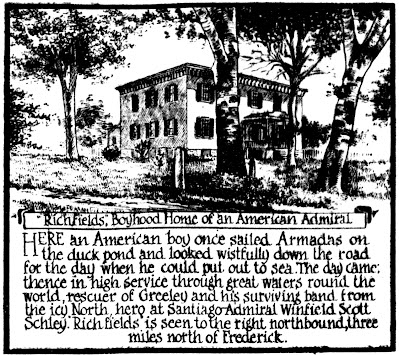 Here an American boy once sailed Armadas on the duck pond and looked wistfully down the road for the day when he could put out to sea. The Day came: thence in high service through great waters round the world, rescuer of Greeley and his surviving band from the icy North, hero at Santiago—Admiral Winfield Scott Schley. Richfields is seen to the right northbound, three miles north of Frederick.

Route 15 is the main road between Frederick and Gettysburg. In 1863, Union cavalry camped here on their way to Gettysburg. A Civil War Trails marker tells us that in June of 1863 Generals Custer and Farnsworth were introduced to their respective cavalry brigades here. 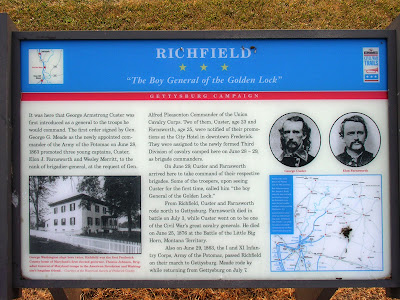 Elon Farnsworth died leading a pointless cavalry charge on the third day at Gettysburg at what is now called the south cavalry field.  "The boy general with the golden lock" led the Michigan Brigade into the fight on the east cavalry field, hollering "Come on you Wolverines" as they charged. 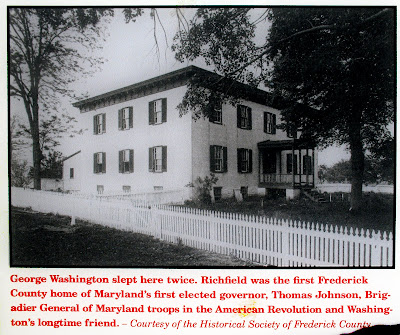 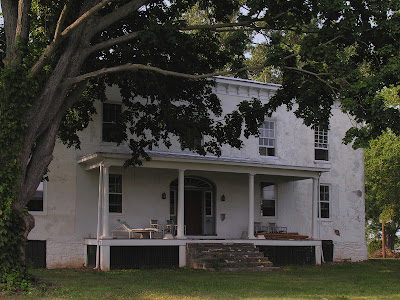 The house was destroyed by a tornado in 1929 and was substantially rebuilt in the same style. 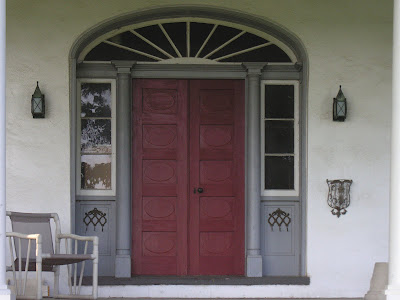 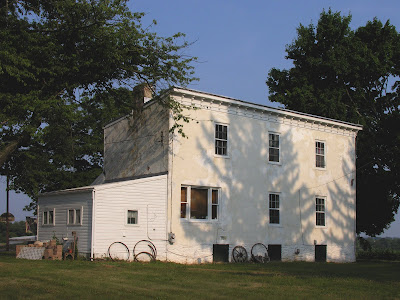 In 1947, the house was purchased by Bruce E. and Frances Crum and remains in the Crum Family today. 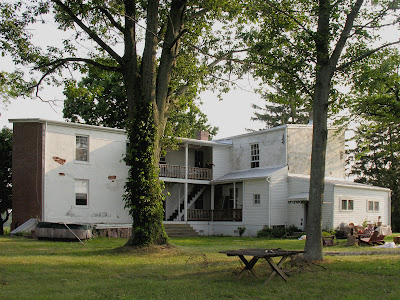 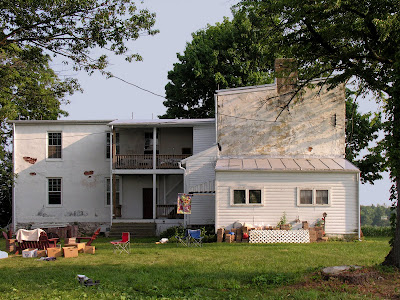 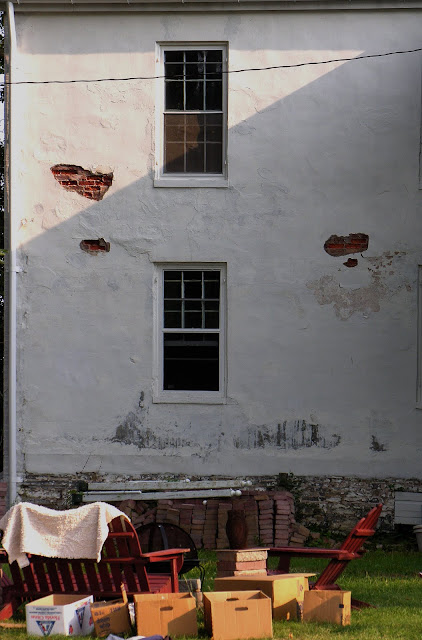 To summarize, this is not the house Washington slept in twice; nor is it the house that witnessed the passage of Civil War armies. Nor is it exactly the same house Admiral Schley was born in. But it carries on a kind of historical continuity by holding the place where those things happened. It reminds me of the man who proudly displayed George Washington's axe, "of course, the head had to be replaced three times over the years and the handle twice."
Posted by Allen Browne at 6:11 AM