of the Transpeninsular Line
﻿﻿

A 1750 Chancery decree had declared that the southern boundary of Delaware was to be a line drawn across the Delmarva peninsula from Fenwick Island to Taylor's Island. Maryland and Pennsylvannia surveyors laid out this transpeninsular line in 1751. The western boundary of Delaware was to be a tangent line from the middle of the transpeninsular line to a 12 mile circle drawn around New Castle courthouse. When the local surveyors proved unable to draw an 82 mile long tangent line on the curved surface of the earth, the Penns and Lord Baltimore engaged the services of Mason and Dixon. This map is from Mathews, History of the Boundary dispute..., 1909. 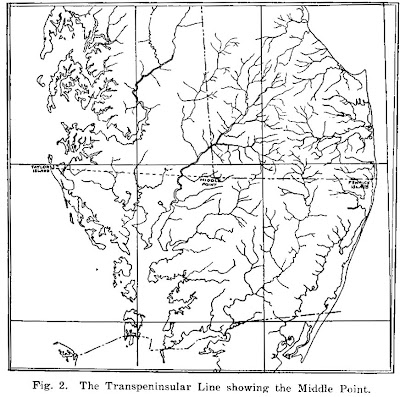 When Mason and Dixon arrived to straighten out the muddle the local surveyors had made of the tangent line, they accepted the Transpeninsular Line as already drawn, as well as the middle point as already marked by the Colonial surveyors in 1760. 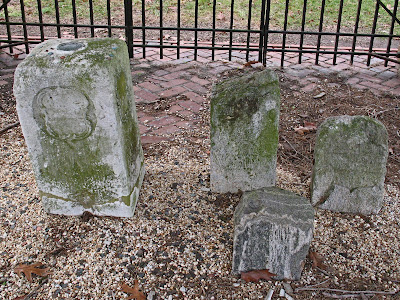 This site includes four stone markers, the first of which is this pre-Mason-Dixon marker with coats-of-arms of the Calverts and the Penns. The Colonial surveyors set this stone 32 inches away from the middle point in 1760 after the sons of William Penn and Frederick Calvert, Lord Baltimore agreed that the middle point would be 69 miles, 289 perches west of a stone at Fenwick Island. This photo shows the remnants of the Penn coat of arms. 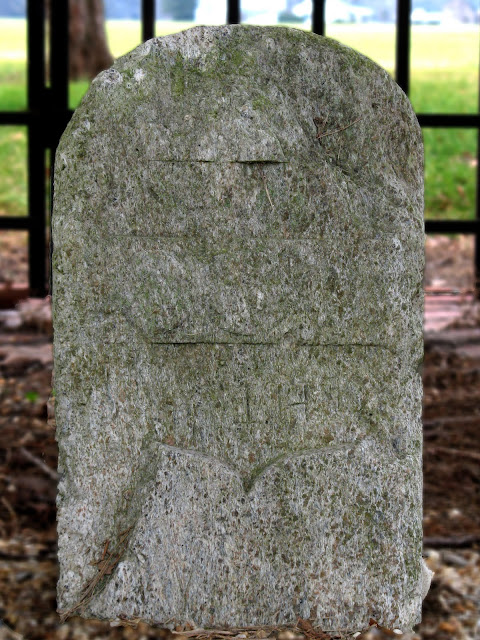 The Calvert Arms on the other side is clearly visible in this 1951 photo from Bayliff. 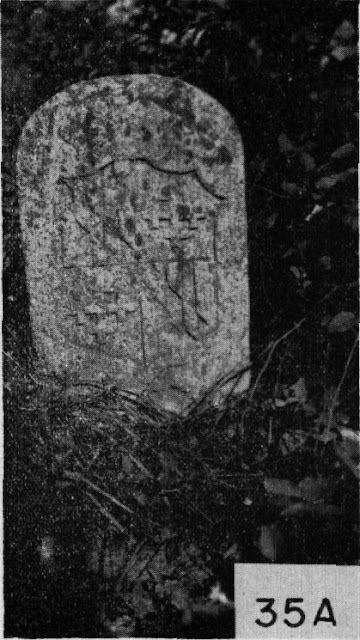 But it has completely disappeared in this 2007 photo. 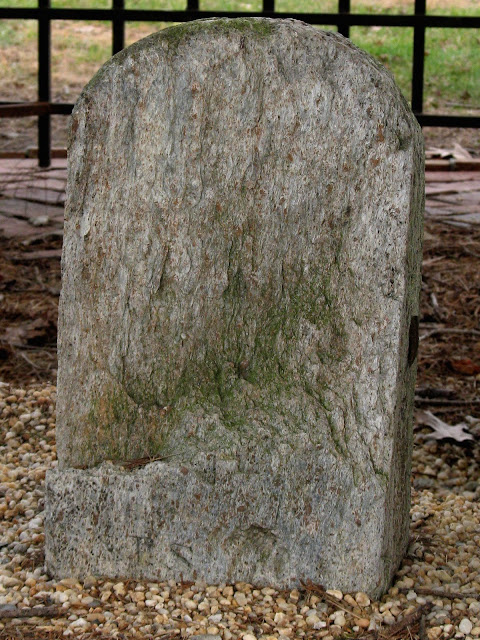 Mason and Dixon placed this Double Crown Stone at the middle point in 1768 after completing the rest of their survey. It has the Calvert Arms on the south and west sides and the Penn arms on the north and east sides. These markers are carved from oolitic limestone imported from England. 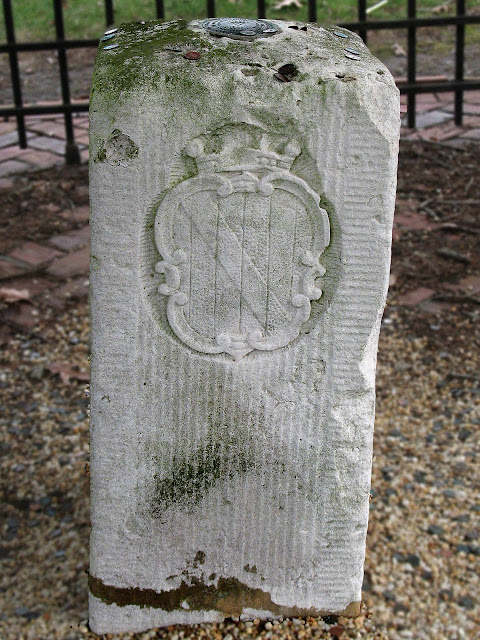 Their version of the Calvert Arms includes only the Baltimore colors (the orange and black part of the Maryland flag) and leaves out the Crossland colors (the red and white cross bottony). The Delaware sides show the Penn coat of arms. 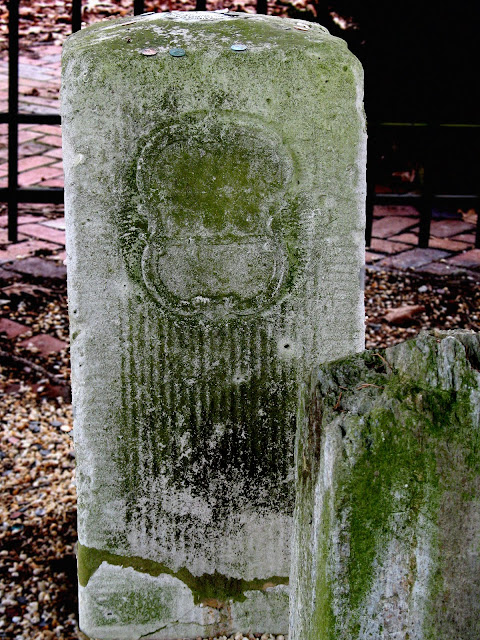 The crown stone was vandalized, broken off at the base sometime after 1972 and was carefully restored to its correct location in 1985.

The stone below is Transpenisular Line marker #25, moved here because of road construction in its correct location according to Roger Nathan, 2000. 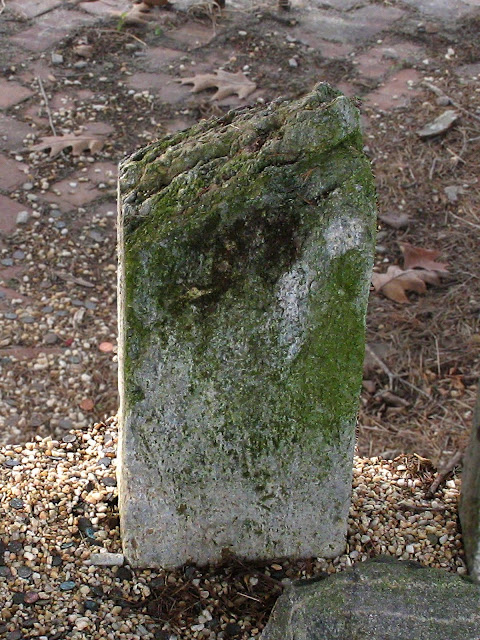 This detail from Mason and Dixon's Map of their survey shows both the middle point and the original location of Transpenisular Line marker #25. 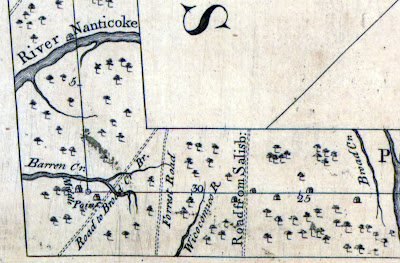 The remaining marker is explained by Nathan this way: 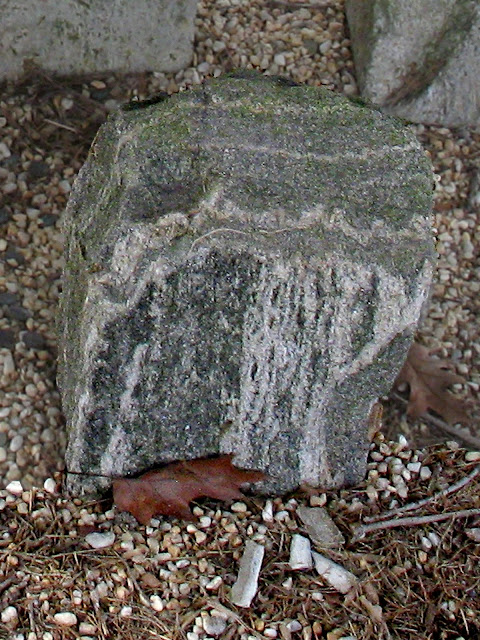 The pavilion was erected in 1961 by the DAR on land donated by Harvey Ellis and George E. Wright. There was a brass plaque on one of the brick pillars, but it has disappeared. 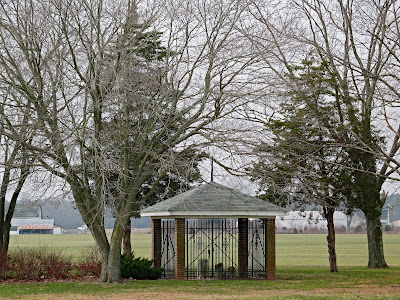 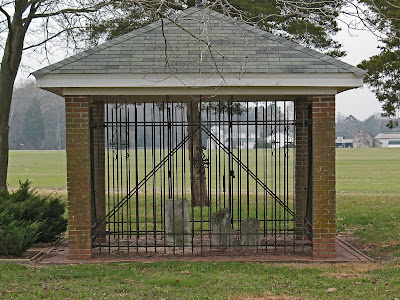