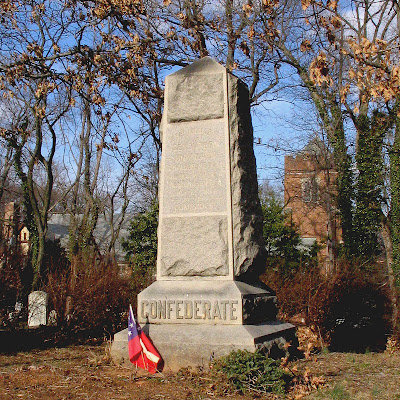 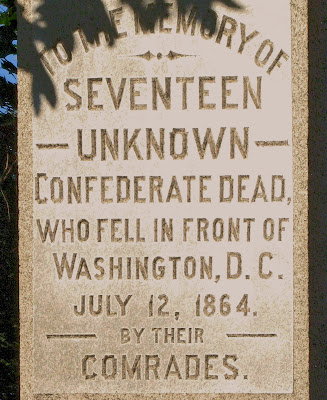 This monument marks the grave of 17 Confederate soldiers who died in the battle of Fort Stevens in July of 1864. After the battle, the Union dead were interred formally at the Battleground National Cemetery. The Confederate dead were buried in shallow graves on several Silver Spring farms. In 1874, the pastor of Grace Episcopal Church, himself a Confederate veteran, was able to locate 17 bodies and had them moved to the church cemetery. The only body that could be identified was Pvt. James Bland of Highland County, Virginia. The graves were lined up in front of the church in a lot donated by Montgomery Blair, a parishioner who had been Lincoln's postmaster and Dred Scott's attorney. 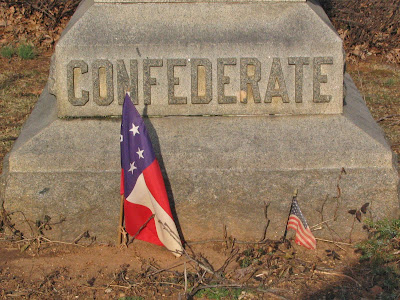 He congratulated those present that the time had come when they could do justice to the memories of their friends, and perform such services unmolested. He alluded to the causes of the war, and justified the south for their actions. He once alluded to the willingness of the south to take up arms to defend their homes from invasion, when a voice in the crowd said, "And we're still willing to do it Doctor." He alluded to the south as "our people" and Jeff Davis as "our president."

The church granted the Street Railway trolley company a right of way along Georgia Avenue in 1898 and, in preparation, moved the bodies in 1897 to a mass grave at the southwest corner of the cemetery. Georgia Avenue was later widened to cover the trolley right of way, so the original location of the graves is now the righthand northbound lane of Georgia Avenue (MD 97). The current monument was dedicated in a ceremony that Soderberg notes was much more conciliatory.


The orator of the day was Judge Samuel Blackwell of Alabama, who spoke of "the almost total obliteration of sectional lines" and the unity of North and South in "stand­ing for the perpetuation of the nation and the flag." According to the Sentinel (November 20, 1896) newspaper, a well-known Washington citizen, Paul Jones, son of a man who had died fighting for the Union, then rose and "claimed the privilege of recognizing the valor of the Confederate soldiers" by laying a bunch of white chrysanthemums at the foot of the monument.

This engraving of the monument appeared in the June 1901 issue of the Confederate Veteran in an article by Carter Barkley entitled "Confederates Were Close to Washington". 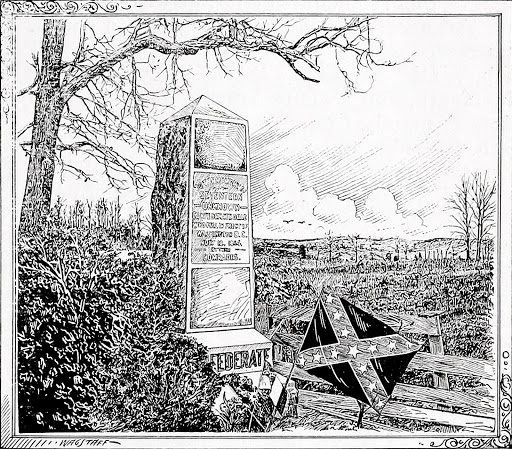 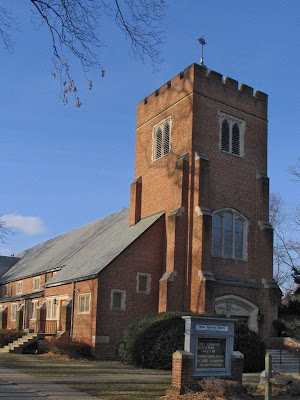 In 1864, when Early's troops marched down Georgia Avenue (then called the 7th Street Road), the modest church building started in 1857 was still incomplete. Robert Oshel gives us this image of the original Grace Church: 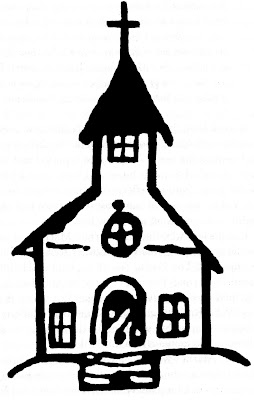 "This is the only known drawing of the first Grace Church building, which was completed during the Civil War and burned in 1896. It was described as 'a modest structure roofed with chestnut shingles, and painted light brown.' It had a large granite block in front of the door, a large stained­-glass window and a gallery at the back for slaves. (Detail from Montgomery County Plat # 15, "Kingsville," June 1895.) Maryland State Archives." -- Robert Oshel, Silver Spring in the Civil War, 2014, page 25

There's a legend that Early contributed $100 to have the roof built. This church building burned down in 1896.


On June 6, 1896, the original church building was destroyed during choir practice when a member of the choir slapped at a moth and accidentally knocked over a kerosene light. Despite the efforts of a bucket brigade bringing water from a well at the rectory across Brookeville Pike, the church burned to the ground within an hour. Construction of a new church building was promptly begun. A brown shingled structure was completed in 1897. -- the Woodside Park website.

So in 1897, when the ceremony took place dedicating the Confederate Monument, Grace Church was the shingled building shown in this old postcard. 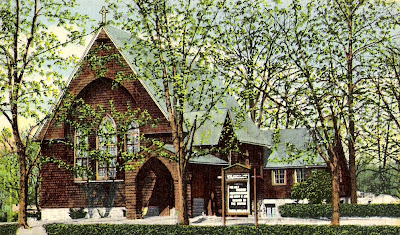 The current red brick building replaced the shingled building in 1956. It was built behind, to the east of, the original church site. 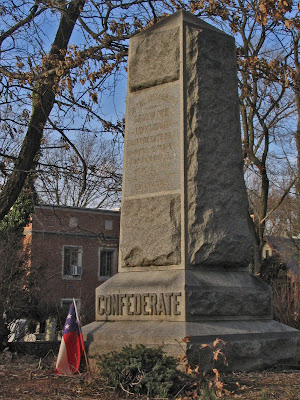 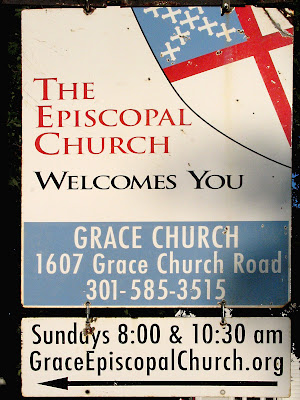 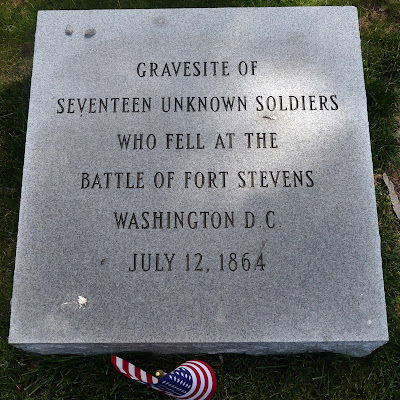 Gravesite of
Seventeen Unknown Soldiers
Who Fell at the
Battle of Fort Stevens
Washington, D.C.
July 12, 1864
The word “Confederate” has been removed; no reference to “Comrades” either. The stone is currently (June 2021) hidden behind a large  “Black Lives Matter Banner.” 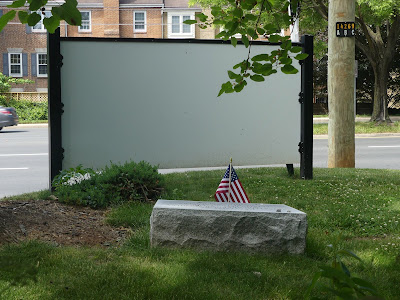 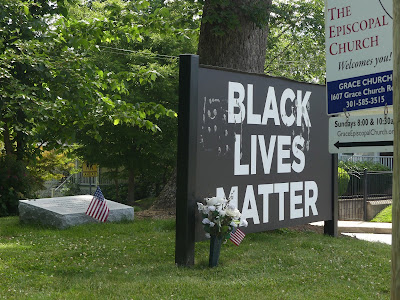