Becky Phipps and the Battle of the Ice Mound 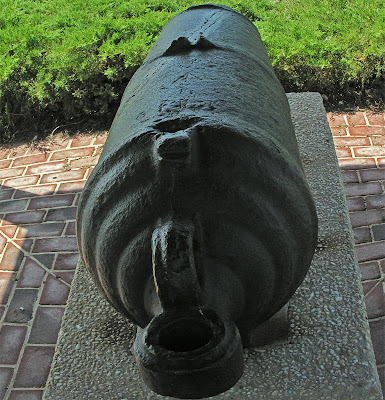 On February 7, 1815, the War of 1812 had been officially over for two months. The treaty of Ghent had ended the war on Christmas Eve, 1814. But word had not gotten to America before the battle of New Orleans on January 8, 1815. Nor had word reached the Chesapeake in February of 1815 when an ice- bound tender from the British sloop-of-war Dauntless was attacked across the pack ice by a small group of Maryland Militia led by Private Joseph Stewart. Stewart impetuously led his group across the ice while the rest of the militia were considering what to do. The Marylanders used a mound of ice as a natural fortification; firing muskets from behind the ice mound, they pinned the crew of the tender below decks where they could not fire the deck guns. The British eventually surrendered. Men of the 48th Regiment of 12th Brigade of Maryland Militia captured 20 prisoners including a black woman, a black man named Abraham Travers, the commander of the tender Lt. Matthew Phibbs, and two cannons. 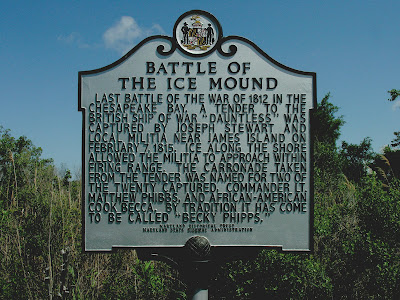 Tradition has it that the black woman was a cook named Becca. She and Abraham Travers were likely escaped slaves. While slavery had not been abolished in the British Empire in 1814, the British were offering freedom to escaped American slaves. The Dauntless had earlier received "71 black refugees" and sent them to Bermuda.

The human prisoners were taken to the county jail in Easton. One of the cannons, a carronade, was used by the small  town of Taylor's Island for patriotic celebrations. It came to be "jokenly" called the "Becky Phipps" after Lt. Phibbs and Becca the cook. 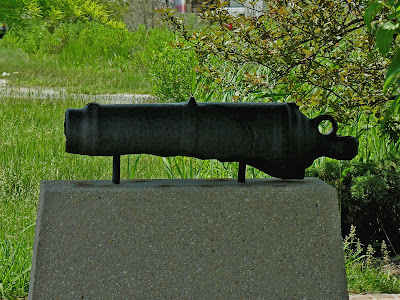 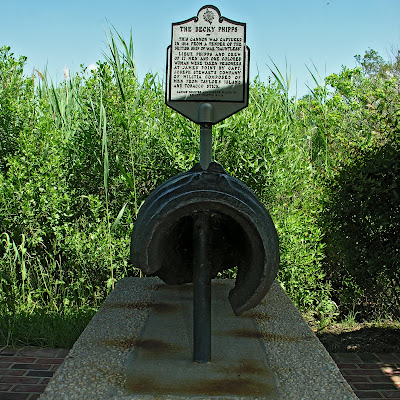 In 1913, when the cannon was fired for the inauguration of Woodrow Wilson, it blew to pieces. Some of the pieces were put back together, placed on a concrete base and marked by the Daughters of the American Revolution. The Daughters not only got the year wrong; they got Stewart's rank wrong as well. 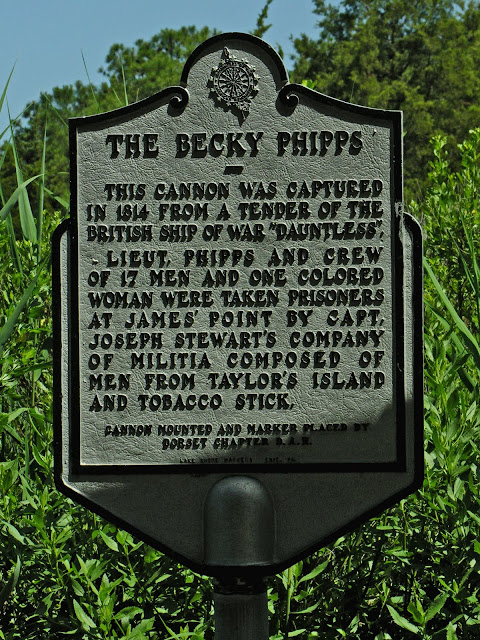 I visited Taylor's Island on Memorial Day weekend, so the graves of veterans in the local churchyards were marked with flags and medallions.  I found several veterans of the Battle of the Ice Mound.  William Geoghagan was at the Ice Mound.
His headstone is in the Bethlehem Methodist Church Cemetery.  Joseph Cator was there, too. His stone is in the Grace Episcopal Church cemetery on Taylor's Island.
Joseph Stewart's powder horn sold for $6,900 in 2005.


The Battle of the Ice Mound was the last gasp of the War of 1812 in the Chesapeake, but not quite the last battle of that war. There was an incident at Fort Bowyer in Mobile, Alabama, the very next day, February 8, 1815.

The story of a battle taking place long after the war is over makes a fitting metaphor for the pointlessness of the war itself. (Consider Pork Chop Hill.)  When anyone serves up the old chestnut that Vietnam was the first war America ever lost, remind them of the War of 1812. Incalculable blood and treasure were spent on this war. The capital was burned, the President and Congress sent running into the countryside. No land was captured from Canada. The Treaty of Ghent essentially returned matters to the status quo ante. If we didn't outright lose the war of 1812, we certainly didn't win it.
Posted by Allen Browne at 8:15 PM