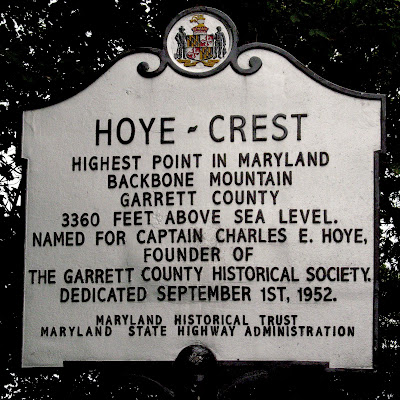 This Maryland State Highway Administration marker is a mile's walk from the nearest road -- West Virginia 219.  The highest point in Maryland is so close to the West Virginia border that the closest entry point is in West Virginia at a small turn-out with a simple wooden sign. 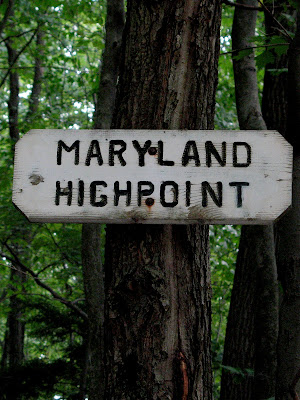 Climbing to the top of the ridge, we find the aluminum marker pictured above, a picnic table, a camera stand, and a mailbox. These are accommodations for hobbiests called High Pointers, a species of Peak Baggers, who travel to the high points of the various states. 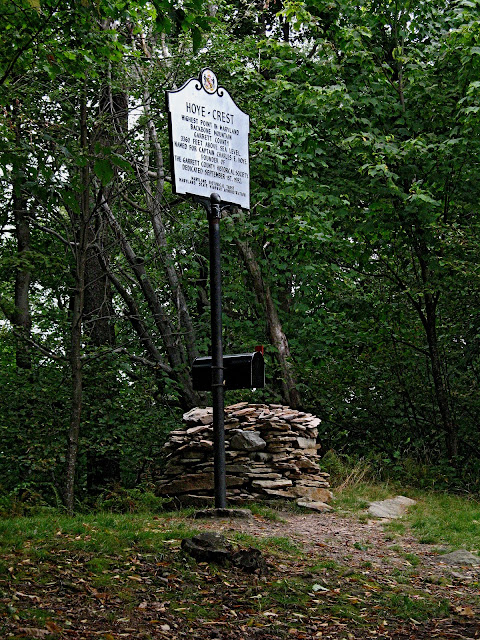 The camera stand is provided so that you can take you own picture at the high point. 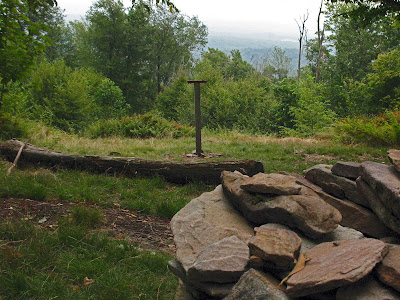 The  mailbox contains certificates to prove you were really here and a notebook to leave your signature in. 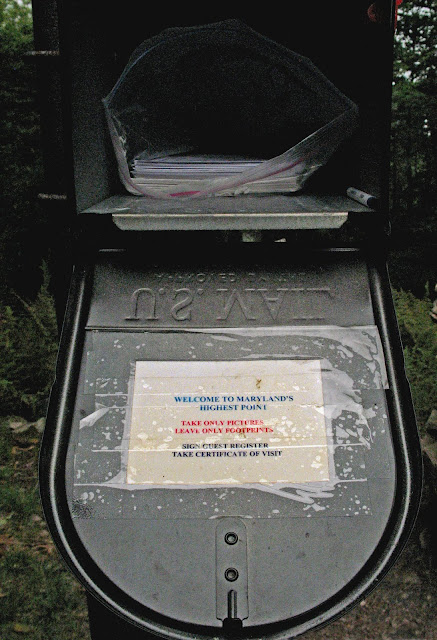 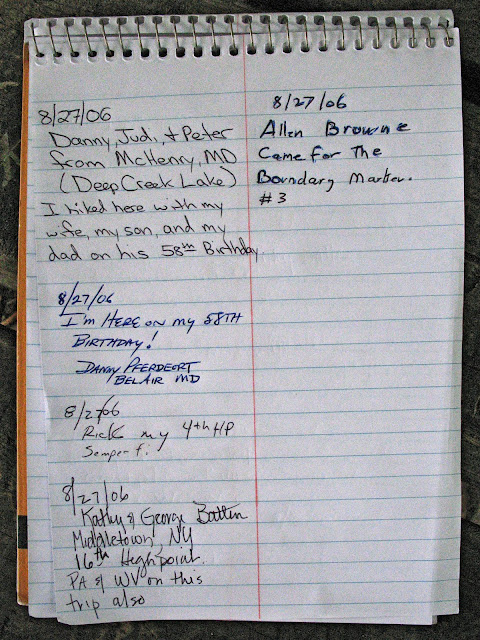 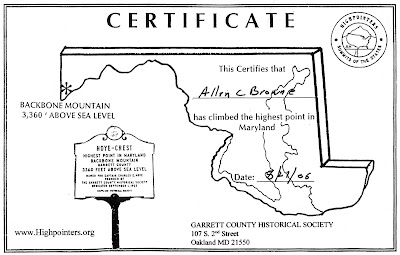 This part of Backbone Mountain carries both the western boundary of Maryland -- The Deakins Line -- and the Eastern Continental Divide. Rivers west of here flow to the Mississippi and ultimately to the Gulf of Mexico. East of here, rivers flow to the Atlantic.

The third marker on the western boundary of Maryland is located just south of the high point along the ridge. 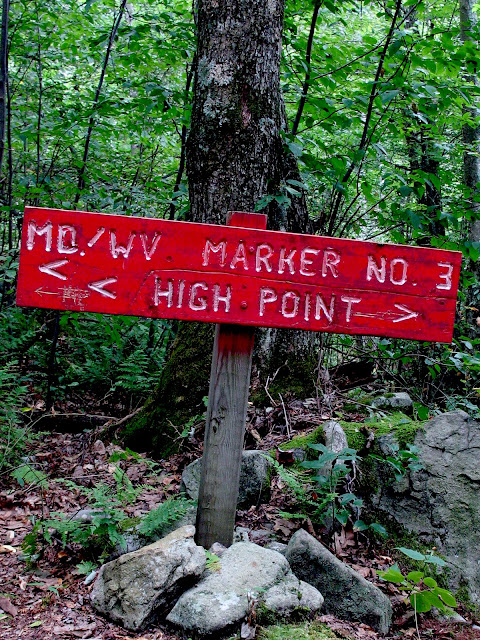 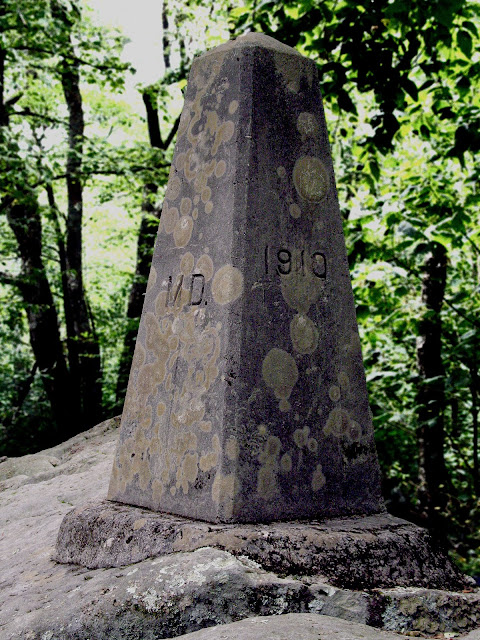 These markers were placed in 1910 as part of the Supreme Court case of that year that finally, after 250 years of uncertainty, settled the location of the western boundary of Maryland by adopting the crooked traditional Deakins line as the boundary between Maryland and West Virginia, the heir to Virginia in this dispute. Deakins had temporarily laid out the western boundary of Maryland as part of laying out bounty lots for veterans of the Revolution. His work was not intended to be permanent so when he found himself off course, he just zig-zagged back to the correct meridian. The Supreme Court found that since this ziggedy-zaggedy line had been treated as the boundary for many years, it had become the true boundary. 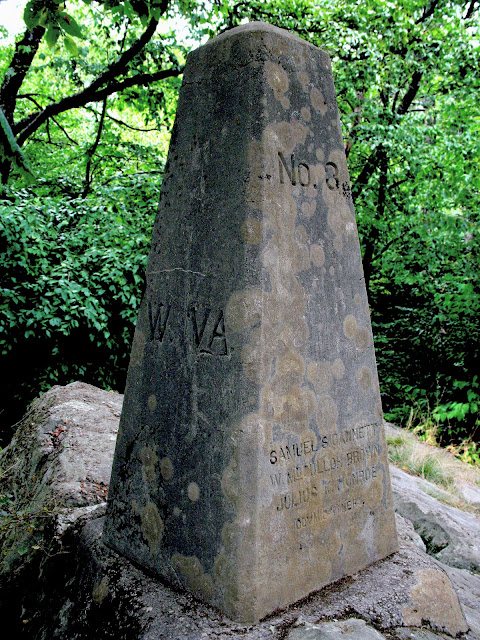 Hoye Crest was named for Capt. Charles Hoye, a veteran of the Spanish-American War, the Philippine Rebellion, and World War I. After WWI, he returned to the Philippines to teach. He retired to Garrett County, Maryland, where he became a voice for historic preservation.


Maryland is proud of the place she has held in the fight to gain and sustain freedom from the earliest days of our Nation's history,
We are proud, too, of our topography which has earned for Maryland the designation of America in Miniature.
We are proud of our coastal lands and their harbors, great and small.
We are proud of the products from our coastal waters and the vast commerce which the sea brings to our doors.
We are proud of our fertile, central plains and of their contributions to the food supplies of the world.
And, for the crowning glory, we are proud of our western heights - the majestic mountains the great lowers of this fortress of liberty that is Maryland.
It is fitting, indeed that the banners of State and Nation should there fly together on the highest  of our mountain towers, and that the place should be marked for posterity.
It is fitting, too, that this point of great altitude should be named in honor of one who led in the development and preservation of the history of Western Maryland, and who has contributed so much to the welfare of his community and of his State.
For this purpose, I, Theodore R. McKeldin, Governor, in thorough agreement with the  proposal of the Garrett County Historical Society, do hereby proclaim the point which it has selected to be Hoye-Crest, in honor of Captain Charles E. Hoye.

That makes this ancient historic landmark a few months younger than I am.
Posted by Allen Browne at 4:59 PM