The Queen of the Corporate Jungle 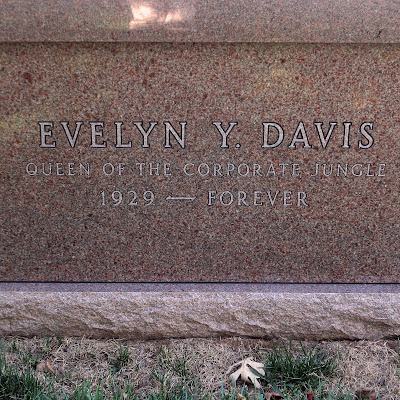 
When Thomas Gray described tombstones as "the short and simple annals of the poor," he certainly didn't have Evelyn Davis in mind. Her burial plot near the front gates of Rock Creek Cemetery -- Washington's oldest cemetery, founded in 1719 --  displays a long and complex story.

Here is a large pink granite sarcophagus with the inscription we saw above, a large tombstone carrying three tablets with three flush headstones in front, and a small bench, all in pink granite. 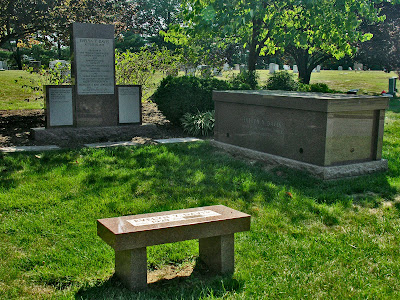 The inscription on the bench reveals that Evelyn Davis is not (yet) buried here. 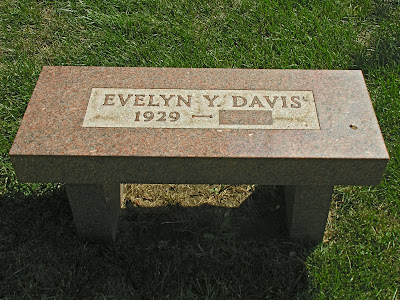 Power is Greater than Love

The left-most tablet expresses her philosophy. 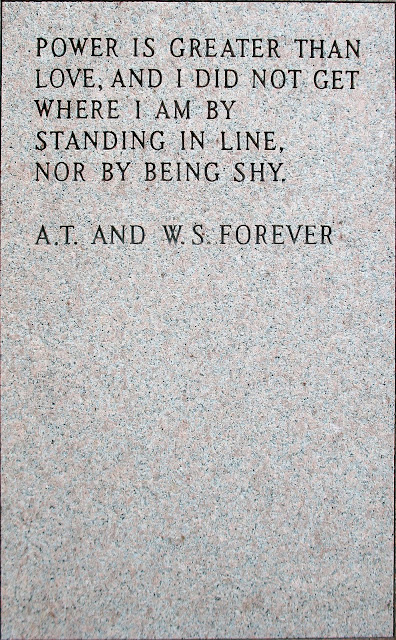 POWER IS GREATER THAN
LOVE, AND I DIDN'T GET
WHERE I AM BY STANDING IN LINE,
OR BEING SHY

John Kelly discussed the on-going mystery of who or what A.T. and W.S. are.

The center tablet covers her history. 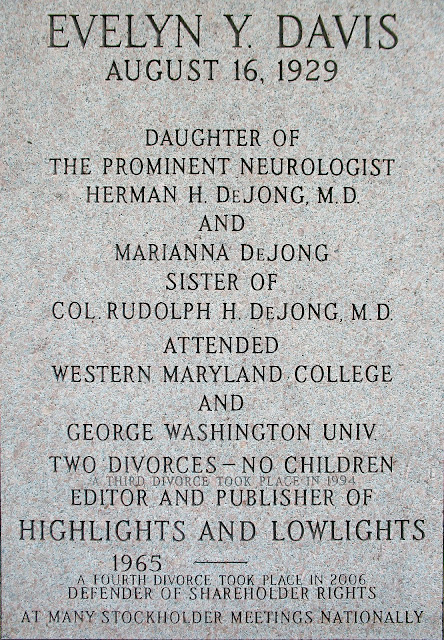 Gadfly with a Fortune

This inscription cannot be read linearly as it is chronologically layered. Evelyn Davis' official biography is online here, but the 1996 People Magazine profile is more revealing. Evelyn Davis is known as a corporate gadfly; "gadfly with a fortune" she says. She owns stock in over 100 publicly held corporations and attends their stockholder meetings in order to question (some say harass) the management. She speaks up in a high-pitched, Dutch-accented voice. (Hear and see her in action here and here.) Since 1965, she has edited "Highlights and Lowlights," a newsletter aimed at corporate CEO's to which a subscription sells for $500 -- with a minimum of 2 subscriptions. CEO's pay this price to try to stay on the good side of Mrs. Davis.

As a journalist, she has been able to attend White House press conferences, as the right-most tablet says. 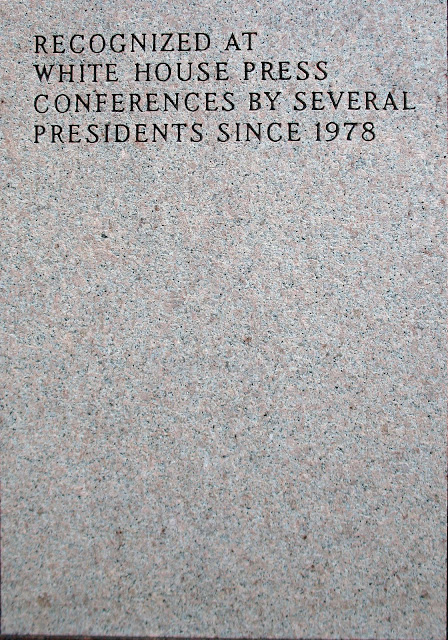 When she erected this shrine to herself in 1981, she had divorced two husbands. She was married to William Davis, an accountant, for less than two years. Her marriage to Marvin Knudsen, a stockbroker, lasted two months. When she married Walter Froh, a retired economist, in 1991, she told the Baltimore Sun that "This is a marriage between best friends." When she divorced him in 1994, she swore to Time magazine, "No more marriages for me." "A third divorce..." was added to the tablet. She married James Patterson, a retired agricultural economist, in September 14, 2005. When they divorced exactly a year later, September 14, 2006, another line had to be squeezed onto to the tablet, between "Highlights and Lowlights" and "Defender of Shareholder Rights." She has been known to remark that her stocks are her children.

Walter Froh died in 2002 and appears to be buried here in the Davis plot. 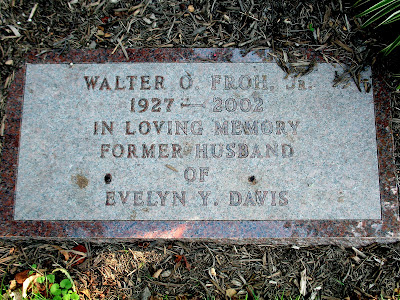 She inherited her first stock from her father who is also buried here. 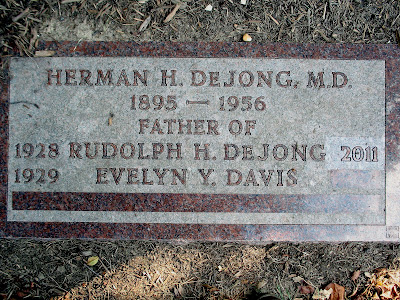 Mrs. Davis' unfinished head stone is sandwiched between them. 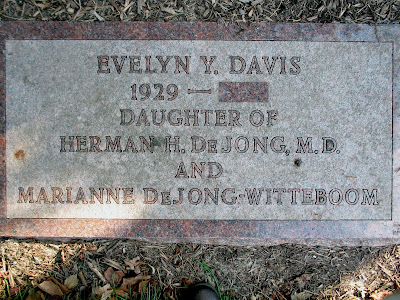 Evelyn Yvonne DeJong was born in 1926 in Amsterdam. Her father, Herman, was a neurologist and her mother, Marianne, a psychologist. Her brother, Rudolf, was also a physician. She says in People magazine, “We had two maids and a French governess. Then the war came and that was it.” In 1942 when Evelyn was 13, The Nazis rounded her up along with her mother and bother and interned them; first in the old castle of Barneveld, later in a concentration camp called Westerbork. In 1943 the family was sent to Theresienstadt in Czechoslovakia. They were liberated by Russian troops in 1945.  After the war her parents divorced and Evelyn came to Baltimore. (This Daily News article tells the story and dishes up some salacious gossip.)

This blog entry was originally published on the 82nd birthday of this extraordinary woman. Evelyn Davis died on Nov. 4, 2018. See her Washington Post Obituary.
Posted by Allen Browne at 5:52 AM