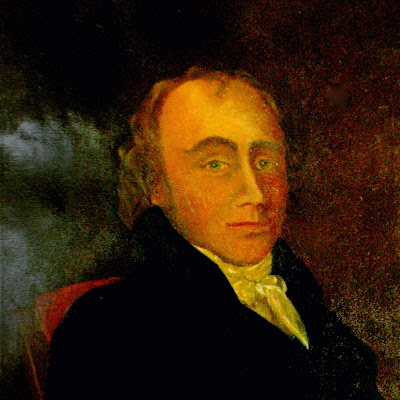 The first biographer of Washington and the origin of the cherry tree tale.
This portrait of Parson Weems appears above the mantelpiece at the Weems-Botts Museum in Dumfries, Virginia. 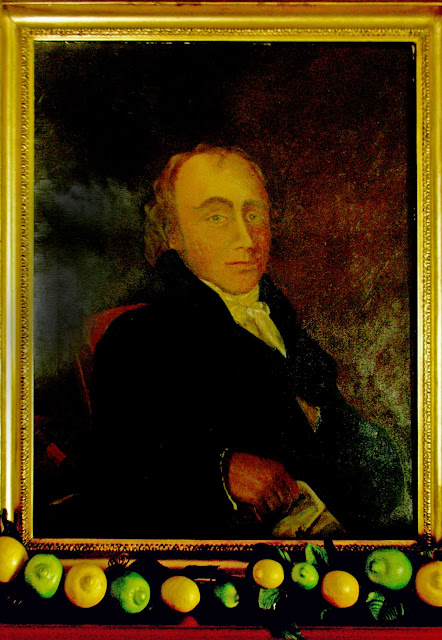 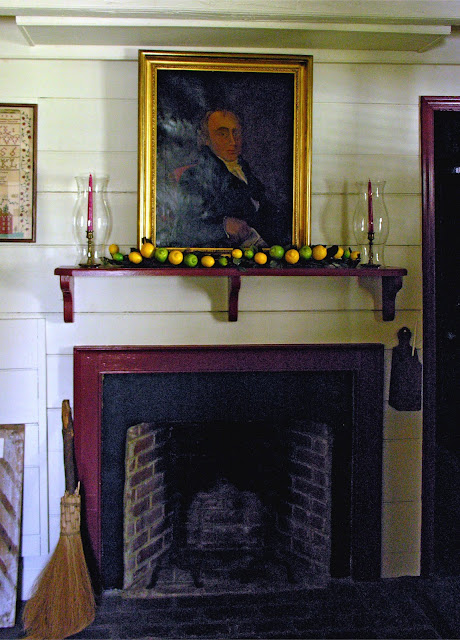 The Weems-Botts Museum is an 18th century house in Dumfries, Virginia, where Mason Locke Weems kept a bookstore. Benjamin Botts, who later had a law office here, defended Aaron Burr in his treason trial. He died in the Richmond Theater fire in 1911. 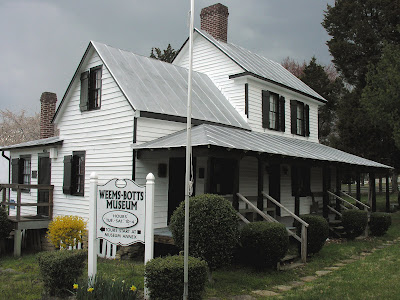 One of the things everyone knows about George Washington is that he didn't really cut down his father's favorite cherry tree and confess, "I cannot tell a lie". Many know that this myth originated in Weems' 1806 biography of Washington. There is almost as much folklore about Parson Weems himself as Weems promulgated about Washington.
Grant Woods poked fun at Weems most famous bit of hagiography in his 1939 painting "Parson Weems' Fable." This print is at the visitor's center at Ferry Farm in Fredericksburg. 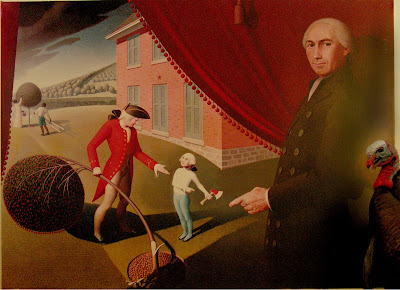 Ignore the stuffed turkey in the photo above, it sneaked in from Charles Wilson Peale's "The Artist in His Museum," the prototype of Woods' painting. 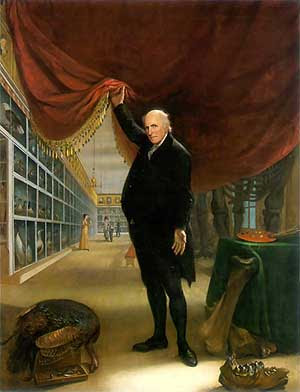 On the other hand, Weems literally appears as a comic book hero who is credited with saving Washington's reputation when he was attacked by his political enemies. 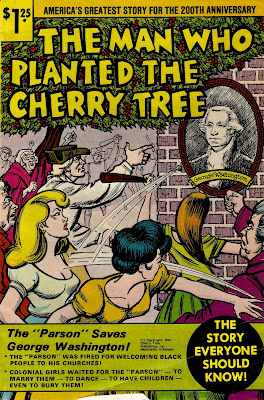 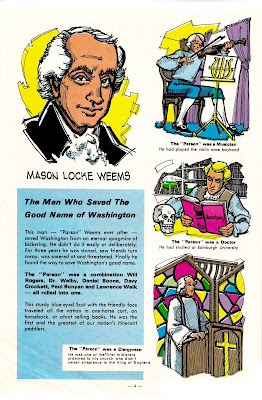 "The 'Parson' was a combination Will Rogers, Dr.Welby, Daniel Boone, Davy Crockett, Paul Bunyan and Lawrence Welk --- all rolled into one."
Weems was a Marylander born in 1759 in Anne Arundel county. At age 14, he went to England and at first studied medicine in London and Edinburgh. He later studied to be a clergyman. Weems was probably in England during the American Revolution. His ordination and that of several of his contemporaries presented a dilemma.  Anglican clergy at the time had to swear an oath of loyalty to the King who is the head of the church; but after the revolution, how could American clergymen swear such an oath? Franklin suggested he just skip it. Adams suggested that American clergy be ordained in Denmark. In August of 1784, Parliament passed the Enabling Act providing that clergy who would serve in foreign lands need not take the oath. Weems was ordained in September.
Between 1784 and 1792, he served as a minister in Maryland. In response to financial difficulties, he became a travelling book salesman, peddling books and preaching all over the United States. In 1795, he married Frances Ewell and settled in Dumfries.  After his father-in-law's death in 1806. he moved into the family's 18th century mansion, Bel Air. In 1798, he set up shop at corner of Duke and Cameron Streets in Dumfries. 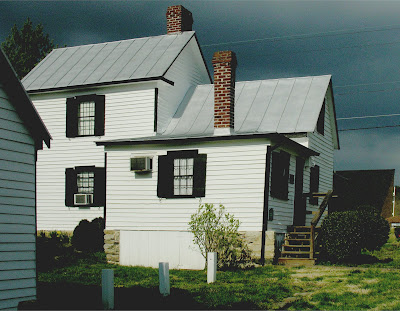 Although Dumfries would be his headquarters for the rest of his life, he travelled widely selling books and pamphlets. 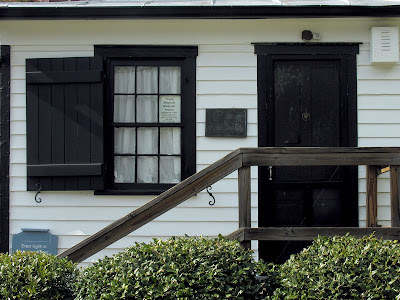 When Washington died in December of 1799, Weems had already written an 80-page biography, his first attempt at writing. He couldn't interest his book supplier, W. C. Carey, in printing it so he had it locally printed. Carey finally published an edition in 1806 which, though still 80 pages long, had been significantly revised and now included the famous cherry tree story. Weems also sold subscriptions to Chief Justice John Marshall's 4-volume formal federalist biography of Washington.
Weems' purpose was to create a popular biography of Washington that would sell better than the slow scholarly tome Marshall was producing. He was aiming at the young who, it was widely believed, needed or wanted heroes to emulate. In order to interest the young and humanize a man known mainly for his public acts, Weems sought to fill in the story of Washington's youth for which there was little hard historical evidence.
The cherry tree tale is a good example. Weems presents the story as a sort of legend, told by an unidentified "aged lady, who was a distant relative, and, when a girl, spent much of her time in the family." He describes the anecdote as "too valuable to be lost, and too true be doubted; for it was communicated to me by the same excellent lady." The story itself is not implausible. Present a young boy with a hatchet and something valuable is likely to be chopped. George was reportedly six years old at the time. Presented with the obvious evidence of his misdeed, it's not surprising that a six-year-old would confess. What makes the story seem laughable today is first the stilted language, "Father, I cannot tell a lie! It was I who cut the cherry tree," and second, the moralizing tone. On the first count, Weems is not guilty. Weems' Washington cries out "I can't tell a lie, Pa; you know I can't tell a lie. I did cut it with my hatchet." Weems is woefully guilty on the second count but that was his intention.

The Three Faces of Mason Weems

So which is real Mason Weems?  The ludicrous mythologizing hagiographer?
﻿ 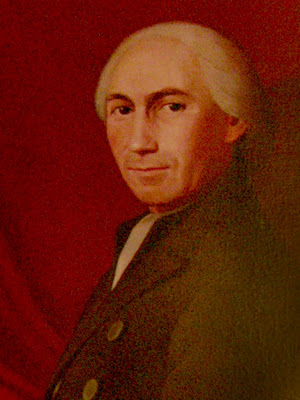 The comic book hero who saved Washington from the calumnies of his enemies? 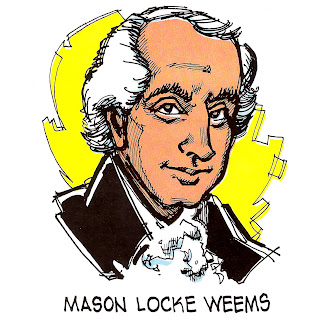 Or the itinerant book salesman scrambling to make a living in early national era America?