Fort Washington on the Potomac 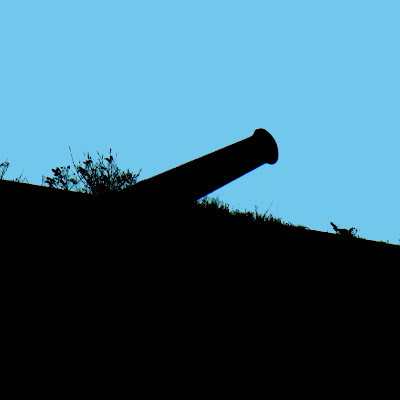 An utter failure when when it was needed, Fort Washington was never needed again.

In 1808 on the eve of the War of 1812,  a fort was built on the Potomac eight miles south of Georgetown, just upstream and across from Mount Vernon, to guard the river route to the Capital. Named Fort Washington, it was often referred to as Fort Warburton after the Digges' plantation on the site of which it was built. The earthwork fort lasted only five years. 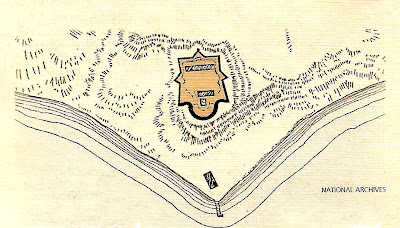 When the British came to Washington in August of 1814, they launched a two-pronged attack. One prong ran up the Patuxent to Benedict through Upper Marlboro to Bladensburg. After their victory at Blandensburg, they moved into Washington where they burned the Capitol and the White House, and the Navy Yard was destroyed by the retreating Americans. 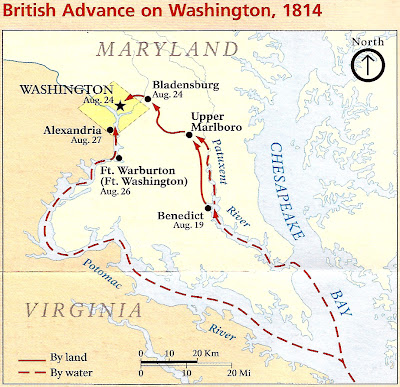 The second prong was up the Potomac. Seven ships under Captain Jame A. Gordon sailed up the Potomac to distract the Americans from General Robert Ross's overland attack. They arrived at Fort Warburton two days after the burning of Washington on August 26. 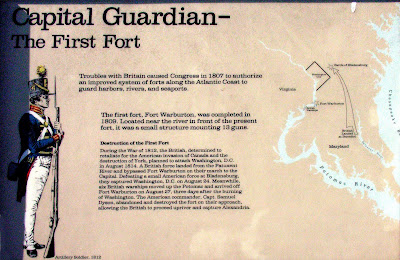 This was the situation the fort was designed for, but in the actual event, the commander Captain Dyson abandoned the fort and blew up it up as soon as the British ships fired on it. Dyson may have mistaken his orders. He was instructed to leave the fort and spike the guns if the British oppressed him from the rear, so as not to let it fall into enemy hands. General Ross's troops were technically in Dyson's rear on their march to Bladensburg, and he felt the British ships in his front made defense of the fort impractical. Dyson's Court Martial found:


that the said Samuel T. Dyson, being commanding officer of the United States Fort Washington, did, on or about the 27th of August, 1814 when an enemy was approaching said fort, misbehave himself before the enemy, run away, and shamefully abandon the fort, post, and guard, which he then and there commanded, and which it was his bounden duty to defend, speak words inducing others to do the like.


that the said Captain Samuel Dyson did on or about the 27th day of August, aforesaid quit his post, called Fort Washington, without any attempt to defend the same; and, without any necessity therefor, from the presence of an enemy did march off the garrison of the same, in violation of his duty, and contrary to his orders.


that the said Captain Samuel T. Dyson, on or about the 27th day of August, 1814, being commanding officer of the garrison at Fort Washington; and an enemy being then in his vicinity was so drunk and intoxicated, while on duty, that he abandoned and destroyed the fort which had been entrusted to his defence and suffered the garrison of the same to disperse, without being pressed to the measure for the safety of himself and the garrison aforesaid.

This painting "The Attack on Fort Washington" by Irwin Bevan shows the fort exploding: 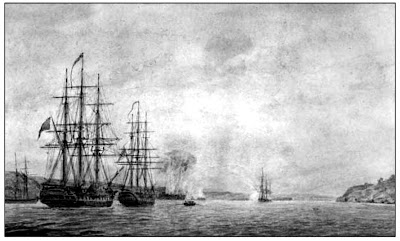 The Capitulation of Alexandria

As Captain Gordon wrote, the destruction of the fort "left the Capitol of America and the populous town of Alexandria open to the squadron without the loss of a man." The City of Alexandria immediately capitulated to the British. Mayor Charles Simms rowed out to the fleet and asked for surrender terms. The invaders demanded and received large supplies of flour, tobacco, cotton, and wine.  The City Council passed  a resolution accepting the British terms on the 29th and Alexandria became the butt of laughter for this failure to resist. This cartoon "Johnny Bull and the Alexandrians" by William Charles captures the level of ridicule. 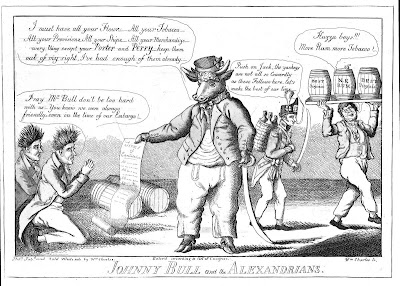 John Bull: "I must have all your Flour, All your Tobacco, All your Provisions, All your Ships, All your Merchandize, every thing except your Porter and Perry, keep them out of my sight, I've had enough of them already.
Kneeling Alexandrian: "Pray Mr Bull don't be too hard with us. You know we were always friendly, even in the time of our Embargo!"
British Soldier 1: "Push on Jack, the yankeys are not all so Cowardly as these Fellows here, let's make the best of our time."
British Soldier 2 (Jack): "Huzza boys!!! More Rum more Tobacco!"


The reference to Porter and Peary puns on the names of David Porter and Oliver Hazard Perry, American naval heroes of the War of 1812. Alexandria and Arlington County were part of the District of Columbia in 1812, so the capture of Alexandria represents a second incursion into the National Capital.

Within 12 days of the loss of Fort Washington, Secretary of War Monroe commissioned Pierre L'Enfant to rebuild it. After a dispute over costs, L'Enfant was replaced by Lt. Col. Walker Armistead who finished the new fort in 1824. It was the large brick-walled star fort we see today. 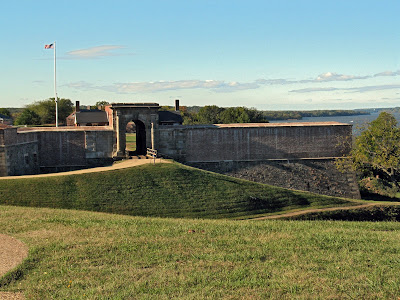 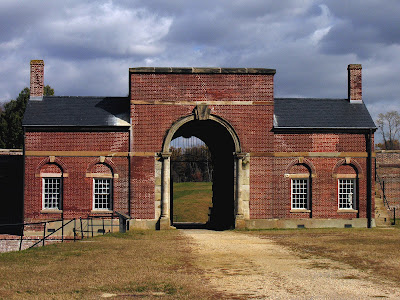 The fort was enlarged in 1840, the walls raised, and platforms added for larger guns. 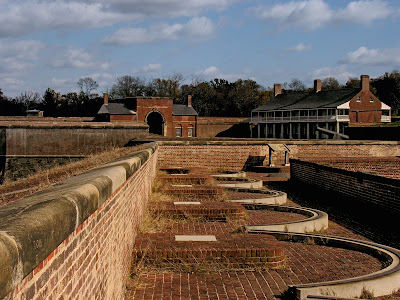 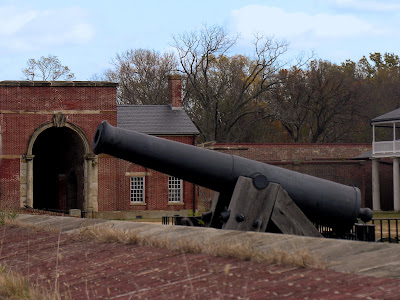 The second fort had a pie-slice-shaped ravelin where the old fort had been. 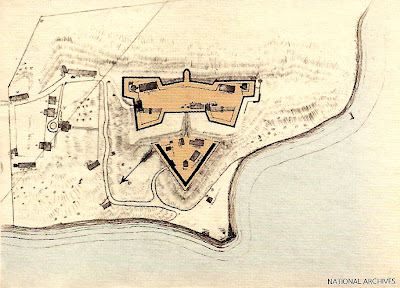 At the beginning of the Civil War, Fort Washington was the only fortification near Washington, DC. But it was by this time already out of date. Mrs. Janet W. Seward daughter-in-law of Secretary of State Seward whose husband was stationed at Fort Foote during the Civil War wrote that "Fort Washington [was] very picturesque, but regarded nearly useless, as stone forts had been proved not strong enough to withstand modern artillery. It was, however, garrisoned at this time." Rifled cannon rendered brick fortifications obsolete; they could  batter down brick walls by hitting them repeatedly in the same spot.
This NPS sign describes the effect of rifled guns on masonry fortifications. 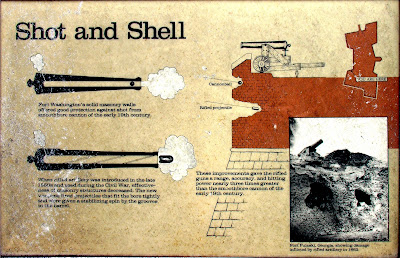 Earthworks like the old Fort Warburton and Fort Foote could absorb even rifled artillery hits with less damage.

This Civil War vintage 24 pounder is the only gun still mounted at Fort Washington. 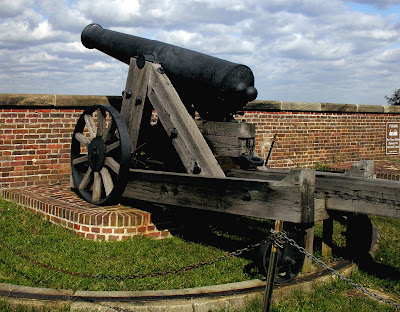 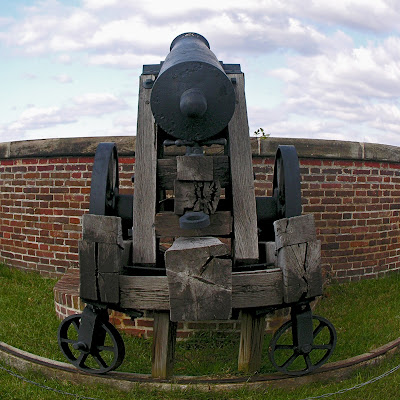 The Civil War defenses of Washington built by Col. John Gross Bernard replaced Fort Washington with earthwork forts, Fort Foote and Battery Rogers. The fort was garrisoned during the Civil War but never saw action. In the early 1870s, four 15-inch Rodman guns like those at Fort Foote were installed. The Endicot Board discovered in 1885 that American coast artillery was behind the times. Just before the Spanish American War, batteries were built at Fort Washington in the "Endicot System." Battery Decatur featured disappearing guns that popped up on spring-loaded carriages and were pushed back down by the recoil of the guns. 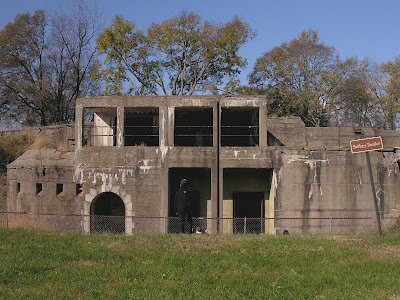 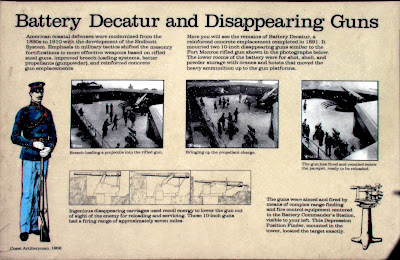 The concrete bunkers of Endicot system batteries have a stark utilitarian design, the ruins of which present a startlingly sinister beauty. 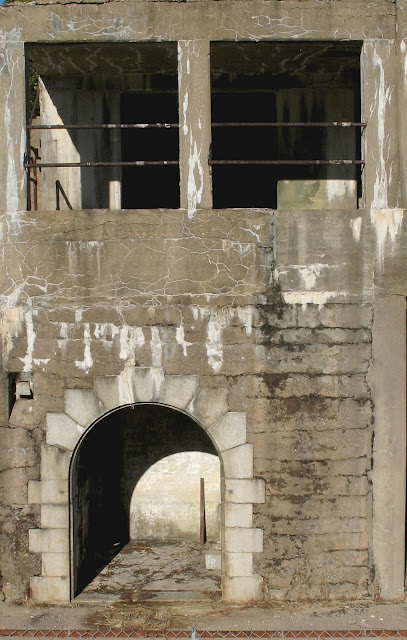 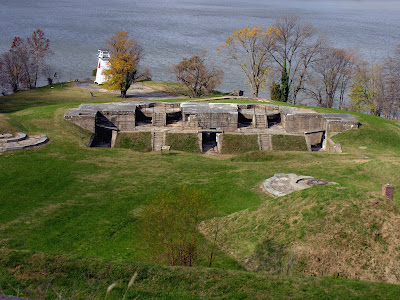 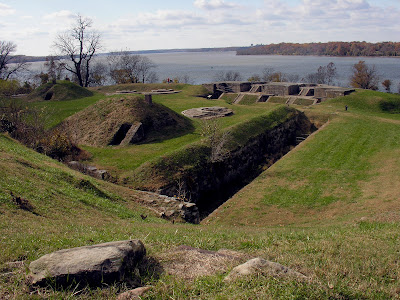 Looking closely at the above photo of Battery White, you can see George Washington's pecan tree at Mount Vernon on the horizon. The binocular view from the ramparts of Fort Washington looks like this: 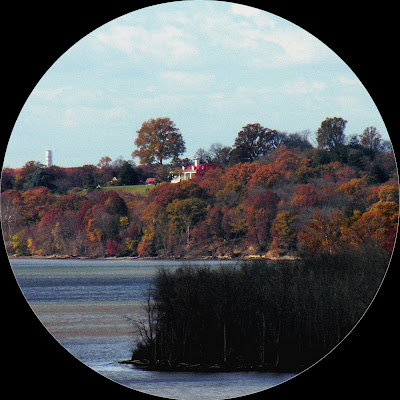 Looking back, here's "The View from the Piazza of Mount Vernon" from Elizabeth R. Johston's Visitor's Guide to Mount Vernon, 1876. 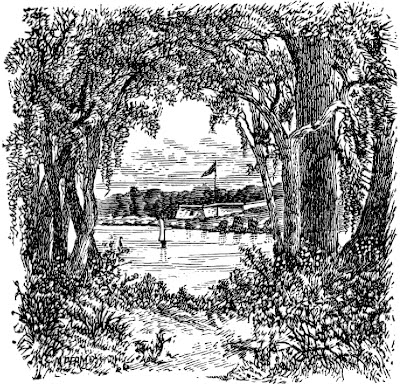 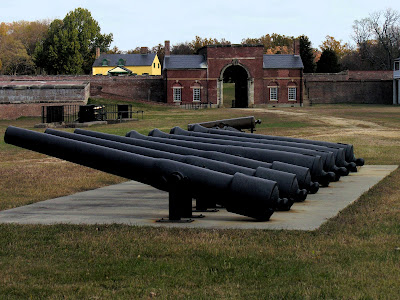 A 1932 historical marker reminds us that before the fort was built, this was the Digges estate where George Washington celebrated his 43rd birthday. 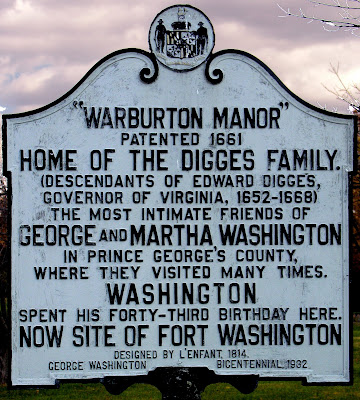 “Warburton Manor”
Patented 1661
Home of the Digges Family (descendants of Edward Digges, governor of Virginia, 1652–1668). The most intimate friend of George and Martha Washington in Prince George’s County, where they visited many times. Washington spent his forty-third birthday here. Now site of Fort Washington, designed by L’Enfant 1814.  (George Washington Bicentennial 1932)

This old lamppost was used as the navigational light on Digges Point from 1857 to the 1870s when it was replaced by a more conventional lighthouse. 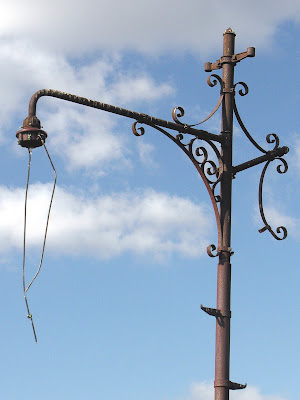 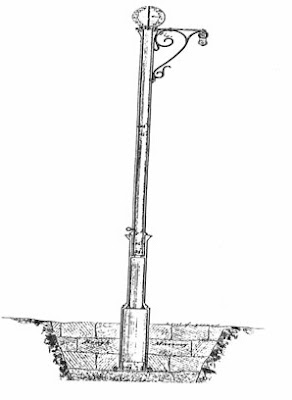 The drawing above from the NPS website shows the lamppost when it was new in 1857. The current lighthouse "Light 80" at Fort Washington looks like this. 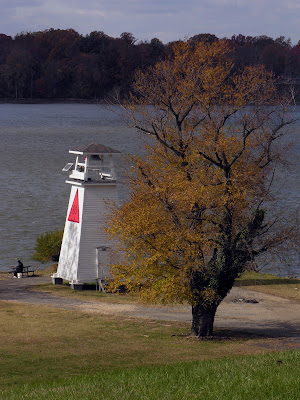 This yellow house was the commanding officer's quarters. Today it is the Park Visitors' Center. 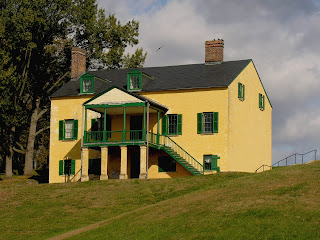 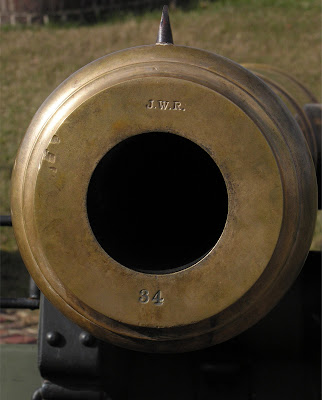