Once Upon a Gay Time 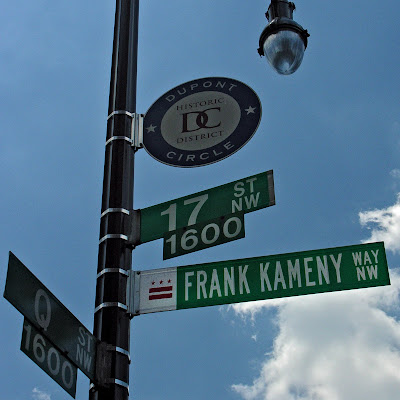 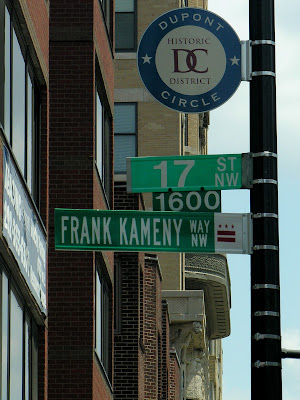 Frank Kameny was Out, Loud and Proud before Stonewall. If you know what that means, you probably know who Frank Kameny was.  He died recently (October 11, 2011) at age 86. 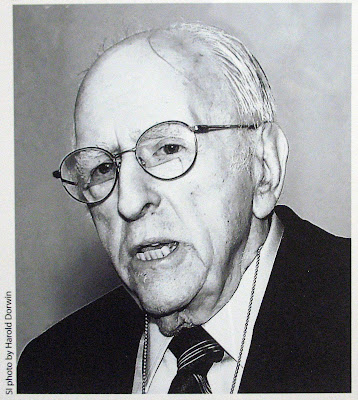 On June 10, 2010, the District of Columbia honored him by naming this section of 17th Street "Frank Kameny Way." This ANC 2B resolution tells the story.

GOVERNMENT OF THE DISTRICT OF COLUMBIA

Dupont Circle ANC 2B considered the above mentioned matter at its regularly scheduled meeting of May 12, 2010, and with a quorum of all nine Commissioners present, passed the following resolution by a unanimous vote of 9-0:

Resolution to Honor Franklin E. Kameny by Naming a Street in the District of Columbia “Franklin Kameny Way”.

Whereas, Once upon a gay time, before the Stonewall riots in New York, before gay marriage, gay adoption and gay real estate, before “Will & Grace,” “The L Word” and cable channels called Logo and Here!, before everyone had a gay relative, there was a man who led a picket line in front of the White House. It was 1965, and the man was Franklin E. Kameny.

Whereas, Frank Kameny is recognized as one of the most significant figures in the gay rights movement.

Whereas, In 1957, Frank Kameny was dismissed from his position as an astronomer in the Army Map Service in because of his homosexuality, leading him to begin a struggle that would spearhead the homosexual rights movement in the United States.

Whereas, Frank Kameny was a founder of the Mattachine Society of Washington, one of the very first group that pressed aggressively for gay and lesbian civil rights.

Whereas, generations of Washingtonians – gay and straight alike – enjoy personal freedoms, respect, and success thanks to the tireless efforts of this remarkable man, Therefore it be resolved that ANC 2B urge the District of Columbia to recognize the unique pioneering role of Dr. Kameny by naming a street in his honor.Be it further resolved that we urge this street naming be done at the time of Gay Pride Week, June 12, 2010.

Be it further resolved that the street to be named be located in a area of the District of Columbia that has significance to the gay rights movement and/or Frank Kameny.

Commissioner Mike Silverstein will represent the Commission on this matter and is reachable at (202) 833-4440 or at mikesilversteinusa@yahoo.com.

After being fired from the Army Map Service, Dr. Franklin Kameny became an iconic gay activist. He lead the first gay rights protest at the White House in the 60's.

One element of Kameny's success was to keep the protests he led uncontroversial and respectable to highlight the normalcy of the demonstrators. His "Regulations for Picketing" required demonstrators to dress in business style, suits with white shirts and ties for men, dresses for women. Signs had to be neatly lettered and approved beforehand. Some of these neatly lettered signs are now in the National Museum of American History. 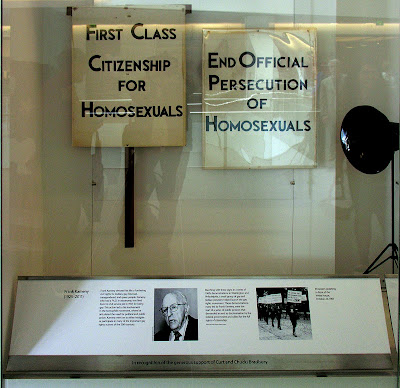 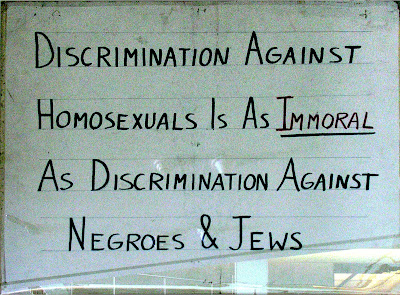 These demonstrators in front of the White House on October 23, 1965, are following Kameny's Rules. 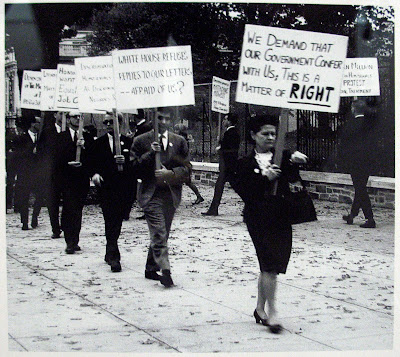 17th and Q anchors a traditionally gay neighborhood in DC. When I stopped by, this Richardsonian Romanesque building was festooned for Gay Pride Day: 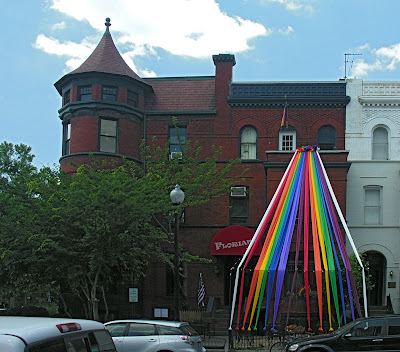 The Trio Restaurant, a 17th Street institution since 1950, is located at 17th and Q. 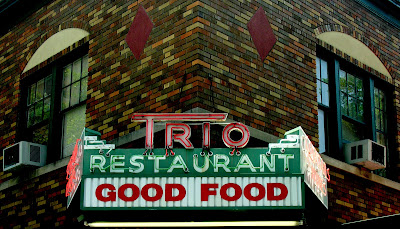 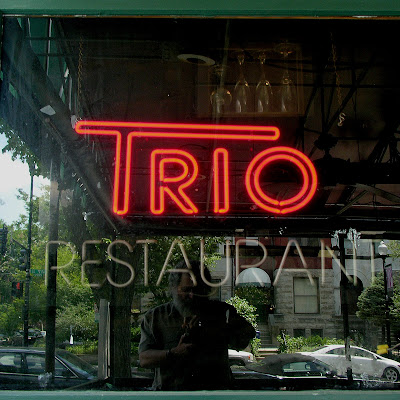 Gay activist, Rainbow Guy, and brother-in-law Judd Proctor and I enjoyed a delicious lunch at the Trio. 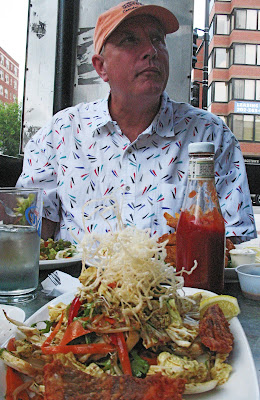 That Thai fried catfish salad tasted as good as it looks.

Frank Kameny lay in state at Carnegie Library on November 3rd, 2011 and there was a memorial service on November 15th. His ashes were to be interred in Congressional Cemetery on March 3rd, 2012. Half the ashes, anyway -- the other half were to remain in the possession of his heir, Timothy Clark. But the interment was postponed due to a dispute over ownership of the grave site. 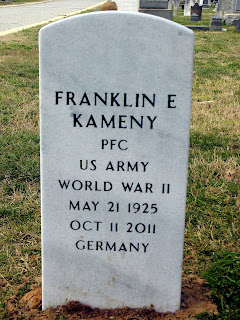 The grave seems to share the plot of Emanuel "Butch" Zeigler right behind the elaborate shrine of Leonard Matlovich. 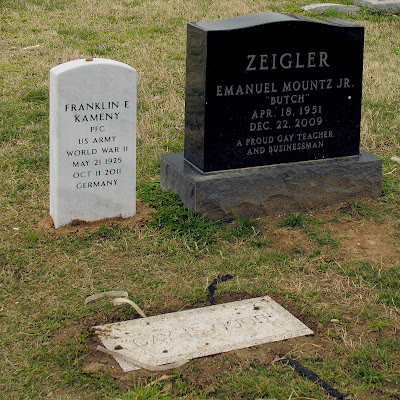 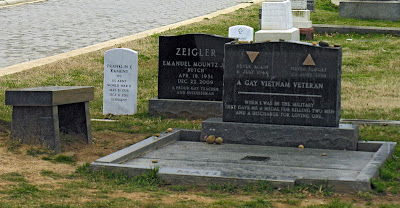 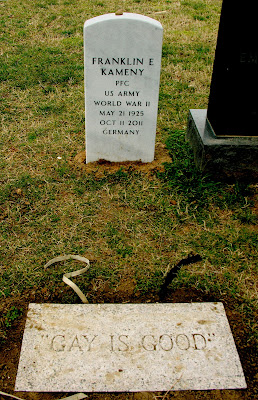 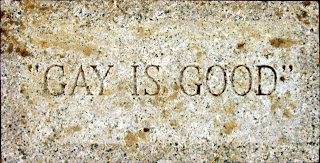 Hear Frank Kameny's own voice, as recorded by Judd Proctor: here.﻿
"This is Frank Kameny saying the Ultimate Absolute Truth:
Gay is Good.
.
Posted by Allen Browne at 11:19 PM