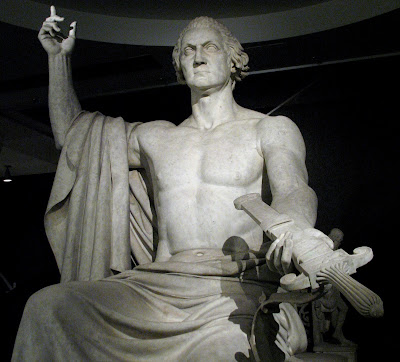 Horatio Greenough's semi-naked statue of George Washington personifying Zeus is on the second floor of the Smithsonian's National Museum of American History near the elevators.

The statue was commissioned by the Congress for the centennial of Washington's birth in 1832 for $5,000. It was intended to sit in the rotunda of the Capitol. Horatio Greenough was an American expatriate living and working in Italy. He is said to be the first native-born American sculptor.  As Oliver Larkin puts it:


Washington crossed the Atlantic on a sloop of war and reached the capital in July 1841. The marble was ten and a half feet high and weighed twenty tons; the Captain's bill was $7700 and it cost an­other $5000 to move it from the Navy Yard to the rotunda. Green­ough was on hand in 1842 to present his own bill; and by the time the Washington sat down in the Capitol, it had cost the govern­ment $21,000.

When it was installed in the rotunda, the doors had to be temporarily widened to admit the huge statue. But it was dark in the rotunda in the days before electric lights and the statue was too heavy for the floor. It was moved in 1843 to the east lawn of the Capitol. Benjamin Lossing published this picture in his 1850, Fieldbook of the Revolution. 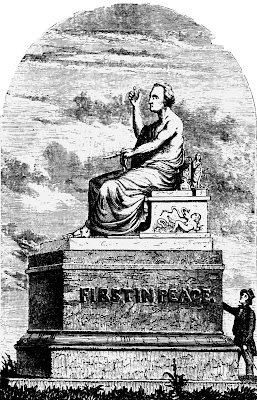 As soon as the public saw the statue, it became an object of scornful humor. As Bickford Cooper in the Connecticut Magazine, 1907, remarks:


The story of Greenough's "Washington" is a tragedy. He conceived him as a colossal, godlike figure, with lower limbs covered with a loose drapery, and seated in a majestic chair. The statue which was intended for the national capitol met with impudence, ridicule and taunts. After being subjected to much ignominy the figure was placed outside the capitol where it still stands. One satirist, when interpreting the meaning of the extended arms, said that one pointed to Mount Vernon and other to the Patent Office, by which he supposed that Washington was saying, "My body is at Mount Vernon; my clothes are in the Patent Office."

The Patent Office was hosting an exhibition of Washington's clothing.  Americans were just not ready to see a recently deceased man, even their revered first president, as a half-naked Greek god.

Greenough's neoclassical conception was to treat Washington as Zeus handing his sword back to the American people and pointing heavenward. 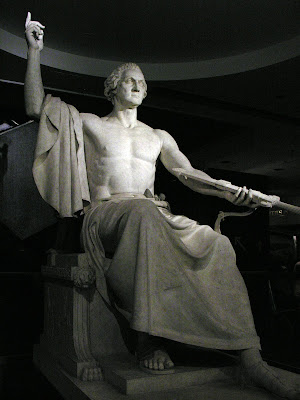 He modelled it on the statue of Zeus on Olympia by Phidias, a copy of which he had seen in Italy. Washington's face was modelled on the bust by Houdon. 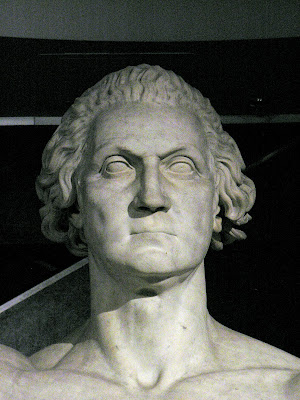 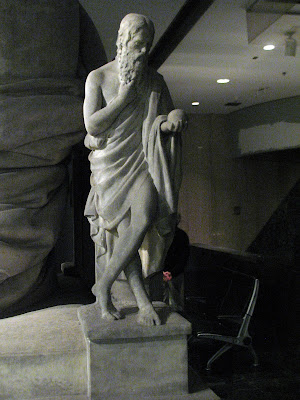 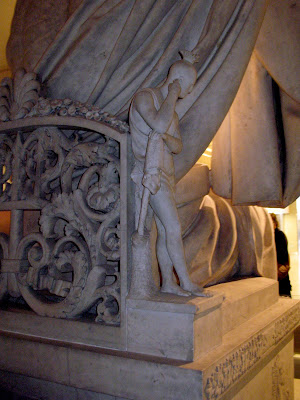 The figure of Columbus replaces what was originally intended to be a "negro."  Kirk Savage in Monument Wars, 2005, gives this explanation.


”In contrast to the Indian supposedly vanishing from the New World, the black figure was taking his place as plantation slavery spread across the continent, the engine of U.S. expansion into the Louisiana Purchase and the Mexican territories. Greenough's ‘negro’ would have connected Washington to slavery, something no monument had ever done or would ever do. But the figure would also have connected Washington to a particular vision of national expansion guided by slavery, a vision that Washington himself did not share.”

On one side of Washington's chair is the infant Apollo strangling a serpent, while his brother Iphiclus hides his eyes in fear. 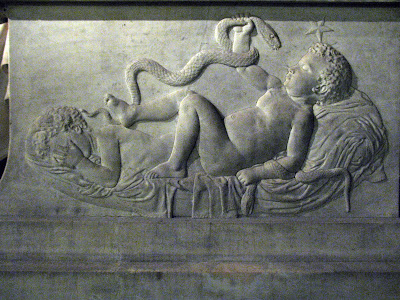 According to Savage,  "Apollo was an allegory of enlightenment, spread by the United States under Washington's example; according to Greenough's own description, Hercules stood for a courageous North America and Iphiclus a cowardly South America."

On the other side of the chair, we find Apollo Phoebus driving the chariot of the sun. 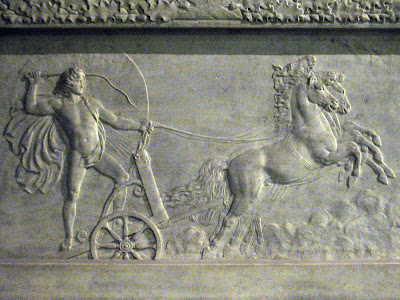 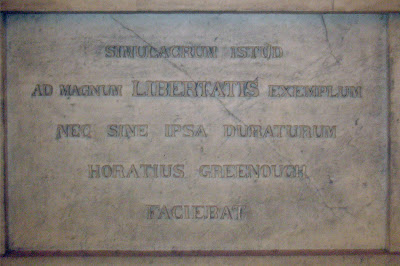 In English that's something like "Horatio Greenough made this statue for a great exemplar of Freedom; not without Freedom can it endure."

The Statue remained on the east lawn until 1908. It was there when crowds gathered for Rutherford B. Hayes' inauguration in 1877. (Photo by Brady Studios.) 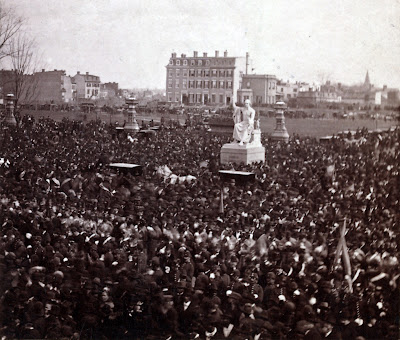 In 1908 it was moved to a crowded room in the the west wing of the Smithsonian Castle. In 1925 it sat behind a graphic arts exhibit. 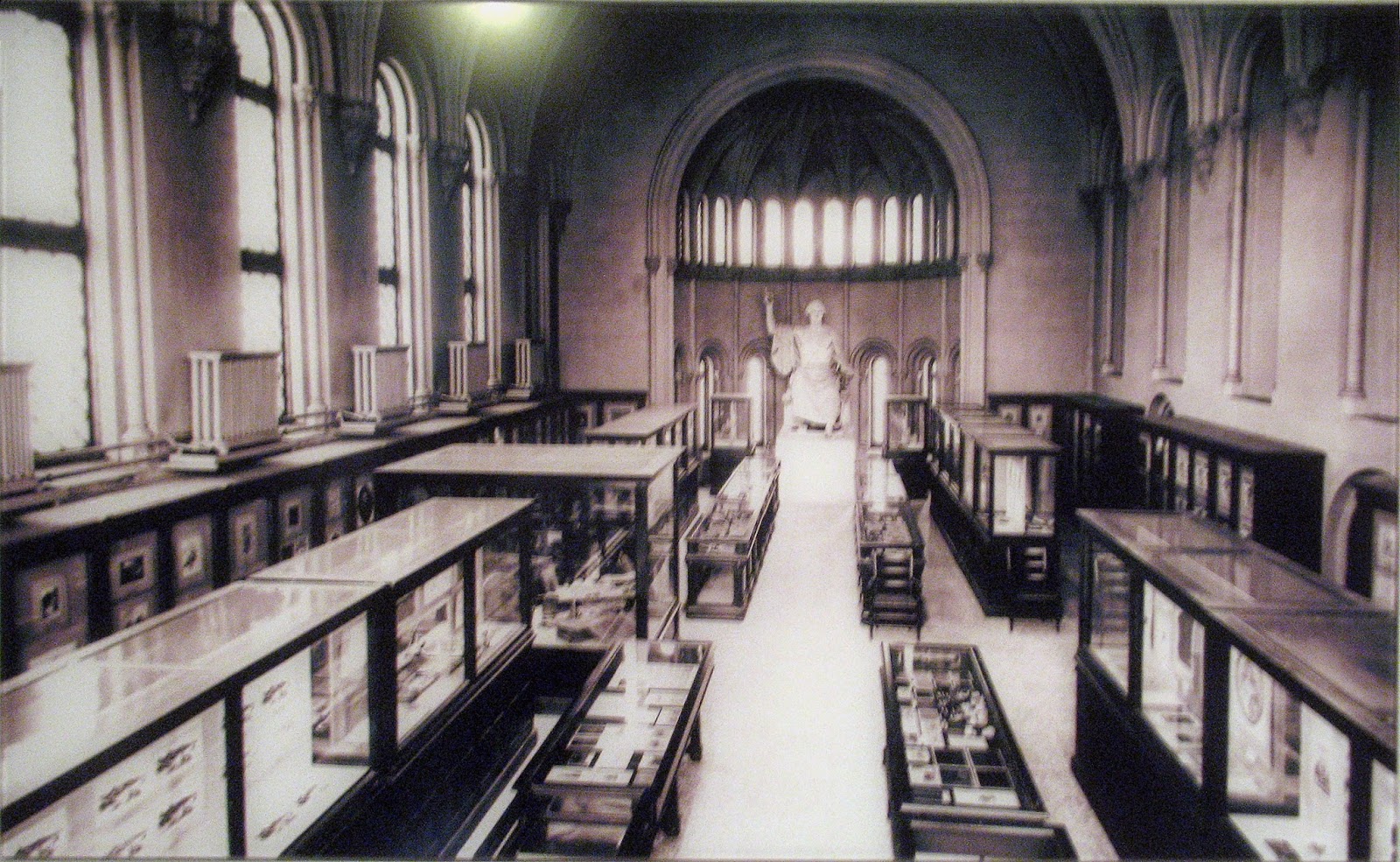 The pedestal with words from Light-Horse Harry Lee's eulogy of Washington became the cornerstone of the 1909 Capitol Power Plant. 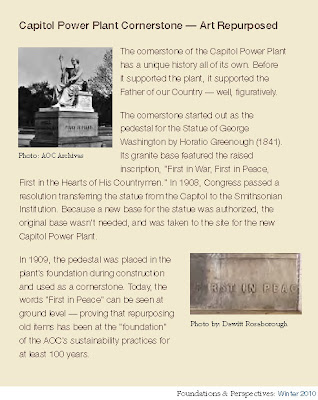 Here William Lewis points to the old pedestal embedded in the North Wall of the Capitol Power Plant. 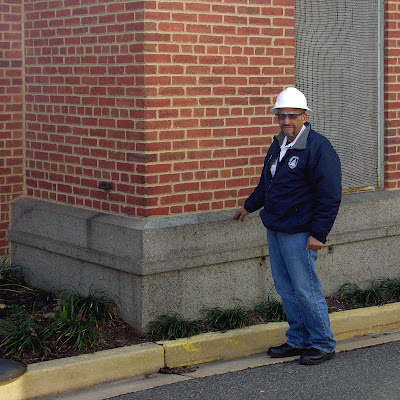 In 1964 the statue was moved to its present location. This 1962 photo shows it being moved into the Smithsonian's Museum of History and Technology, today's National Museum of American History. 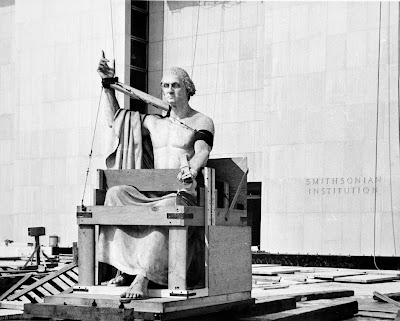 Washington towers over tourists on the second floor of the museum. 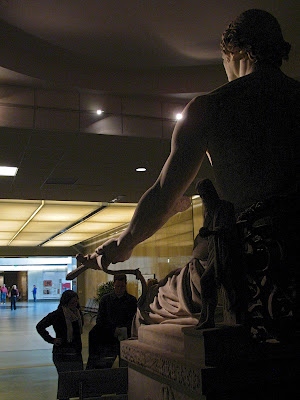 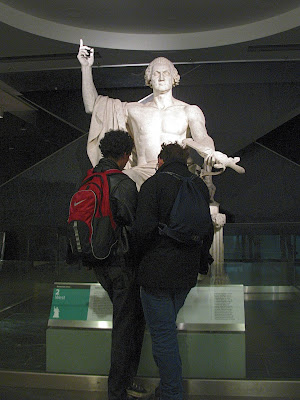 Greenough's Washington can be seen  reflected in the mirror of the Greensboro Woolworth's lunch counter where African American students sat-in in 1960. 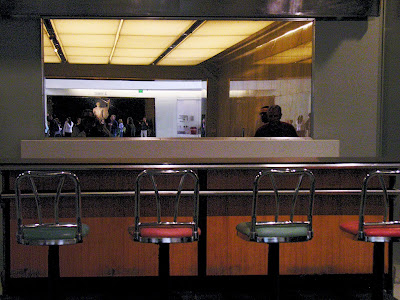 For more on this statue see: The Portrait Gallery: George Washington
Posted by Allen Browne at 6:07 AM