I Cannot Tell a Lie. 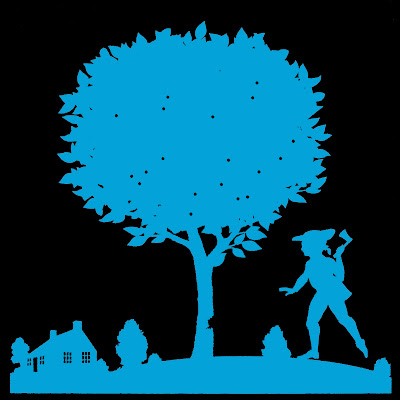 Virginia historical marker J-61 is located on Route 30, The Kings Highway, at the entrance to Ferry Farm. 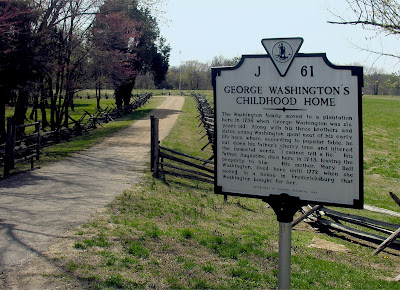 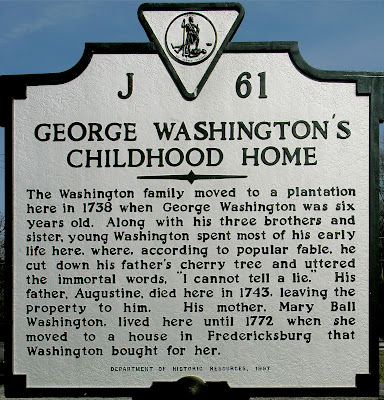 The Washington family moved to a plantation here in 1738 when George Washington was six years old. Along with his three brothers and sister, young Washington spent most of his early life here, where, according to popular fable, he cut down his father’s cherry tree and uttered the immortal words, “I cannot tell a lie.” His father, Augustine, died here in 1743, leaving the property to him. His mother, Mary Ball Washington, lived here until 1772 when she moved to a house in Fredericksburg that Washington bought for her.

Ferry Farm or Pine Grove, across the Rappahannock from Fredericksburg, Virginia, is the site of Washington's boyhood home. Washington lived here from 1738 to 1754 when he moved to Mount Vernon. George's father Augustine bought this property near the ferry to Fredericksburg from the estate of John Strother in 1738 and moved his family there in the fall of that year.

Ferry Farm is the stage set on which Mason Weems fabulated the story of a national hero's heroic boyhood. I have argued elsewhere for the general plausibility of the cherry tree tale. As a sign in the visitor's center here says, "If the story is true, It happened here." This print of the Grant Wood painting "Parson Weem's Fable" is part of a display on the mantelpiece at the visitor's center. 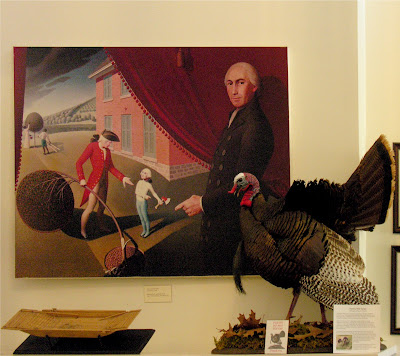 Here, too, George Washington may or may not have thrown a Spanish silver dollar across the Rappahannock. Of course young men love to throw things and Washington is known to have been proud of his physical prowess. So that tale, too, is plausible if not proven.

The house the Washingtons lived in is long gone. The Neo-Georgian visitor's center building was built as a school in the 1960's. This drawing by Leslie Barker of Ferry Farm and the Washington house in 1740 is informed by recent archaeological investigations. 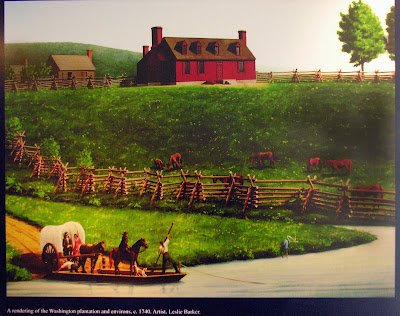 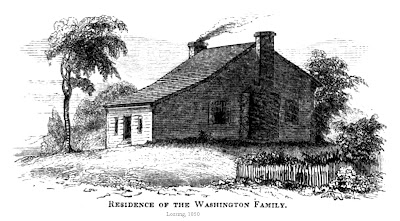 George H. S. King in 1937 argued that since Augustine Washington's property inventory was so large, the house had to be larger than the one depicted by Lossing.

The archaeologists have placed stone corners to mark the location of the Washington residence. 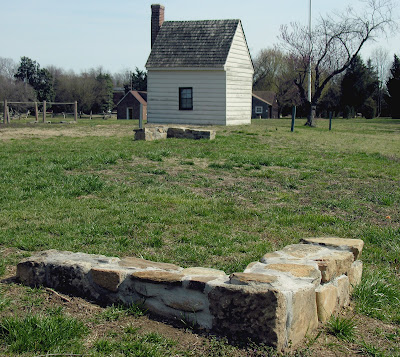 The small wooden house in the photo above has its own legend. It has often been called "George Washington's Survey Office".  George Allen England in Boys Life, 1926, describes this building this way.

Not the least interesting of the George Washington relics at Pine Grove is the old survey office where George studied to fit himself for Lord Fairfax's employ. This ancient building still retains the original hand-made clapboards and shingles, also the old fireplace and chimney that kept George warm when he was bent over his surveying books on frosty evenings. He was only fourteen, you remember, when his mother refused to let him accept a commission as midshipman in the British Navy. After that be came back home. Pine Grove was always "home" to him, even when he became President, and there plunged into the study of mathematics and surveying. The owner of the farm has protected this venerable building by putting a corrugated iron roof over it, but still the woodwork is wearing away and as the building is now occupied by a farm-laborer's family there is always the risk of its destruction by fire. 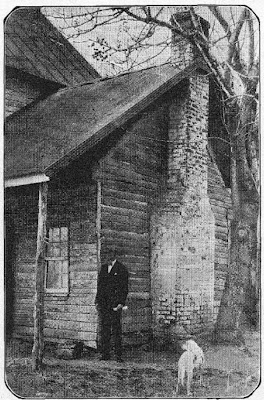 ﻿
This small building was actually built as a farm worker's house in the last quarter of the 19th century. Today the overarching tin roof is gone along with the Carson farm house which was moved next to it in 1914. 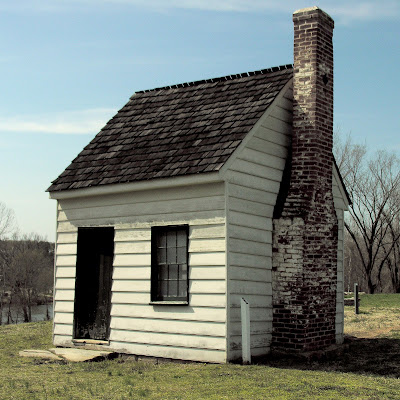 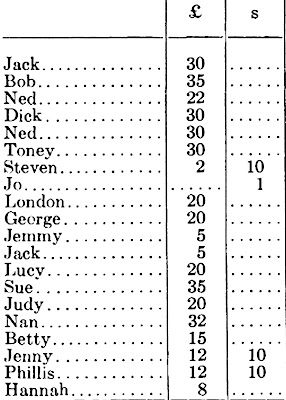 Which ten of these were inherited by George is unknown to me. It certainly makes one wonder who "Jo" was and why he or she was worth only 12 pence.

George Washington moved to Mount Vernon in 1754 after his brother Lawrence died in 1751 and after the humiliating defeat at Fort Necessity. The 22-year-old Lt. Col. George Washington had bumbled into provoking the French and Indian War at Jumonville Glen in late May of 1754 and surrendered Fort Necessity in early July with a confession (later repudiated) that he had assassinated a French diplomat.

Mary Ball Washington lived at Ferry Farm until she moved into Fredericksburg in 1772. According to the WPA Guide for Virginia:


After 1772 Mary Washington continued to manage Ferry Farm from Fredericksburg, riding out each day in a chaise. When her son-in-law, Colonel Fielding Lewis, offered to take the responsibility off her shoulders, she replied: "Keep my books, for your eyesight is better than mine, but leave the management to me."

Washington sold Ferry Farm in 1774 to Dr. Hugh Mercer a Fredericksburg physician and apothecary. Mercer had served as a physician in the Army of Bonnie Prince Charlie and had been present at the battle of Culloden in 1745. Mercer fled to America after the defeat of the Charles' army in 1746. Like Washington he served in the French and Indian War and later became a Brigadier General in the Continental Army.  This 1906 statue in Fredericksburg shows him as a Continental Officer. 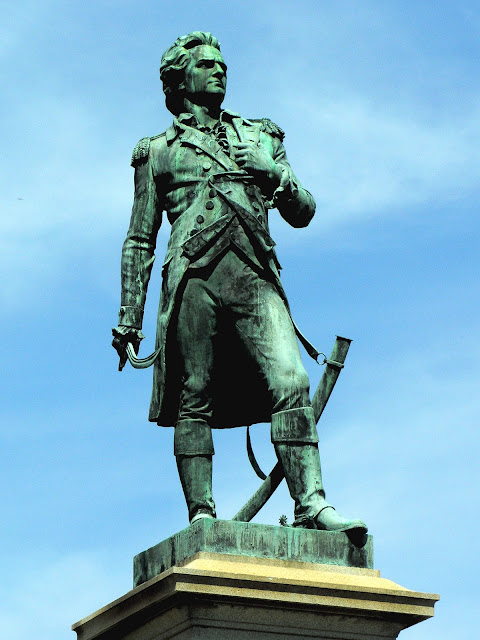 Mercer died from wounds sustained at the Battle of Princeton in 1777, perhaps Washington's most famous victory in the Revolution. He never lived on his property at Ferry Farm. The National Landmark Nomination form says:


During the Mercer ownership the site first became the object of veneration. George Washington was appointed commander-in-chief of the Continental Army in 1775 and in 1777 the first recorded tourist made a pilgrimage to Ferry Farm. Ebenezer Hazard, later a pioneering American historian, went out of his way while passing through the region to visit the site, where he erroneously believed Washington had been born. During the decades that followed, many more pilgrims followed Hazard's example of traveling to Ferry Farm.

By 1833, all that remained of the Washington house at Ferry Farm was a pile of rubble as seen in the lower right corner of this painting by John Gadsby Chapman: 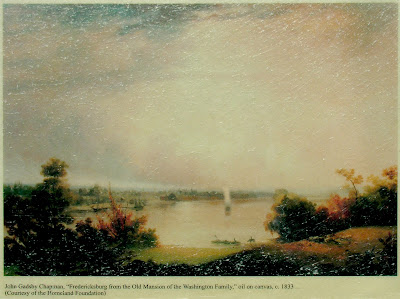 In 1833, artist John Gadsby Chapman visited the site to paint "Fredericksburg from the Old Mansion of the Washington Family," which depicts the ridge on which Washington House had stood, with a pile of rubble in the middle distance apparently intended to represent the remains of the house. On the back of the canvas is a note, seemingly in the artist's hand, that the house had been "pulled down."

The Ferry Farm was an important Union position during the battle of Fredericksburg in 1862 in the center of the Federal line. A pontoon bridge was built at the ferry landing and artillery were stationed here. A large contingent of the Union forces crossed the Rappahannock on the pontoon bridge to join the Battle of Fredericksburg. An interpretive sign at Ferry Farm contains this quote from William Draper of the 36th Massachusetts:


The part of the line that it usually fell to my lot to hold was the old Washington Farm, where General Washington passed most of his earlier years, and where he cut the cherry tree with his little hatchet but could not tell a lie.

In the 1960's, Youth for Christ, Inc. bought the eastern part of the property and built the school building that is the current visitor's center.  Youth for Christ planned to build a "Temple of Truth" on Ferry Farm to honor George Washington and inspire American youth. These plans ultimately failed.

By the 1990's, suburban development threatened Ferry Farm. In 1996, Wal-Mart proposed to build a store on the site. The Kenmore Foundation took over the property that same year. Since 1998, it has been protected by an easement to include it in the George Washington Birthplace National Monument. 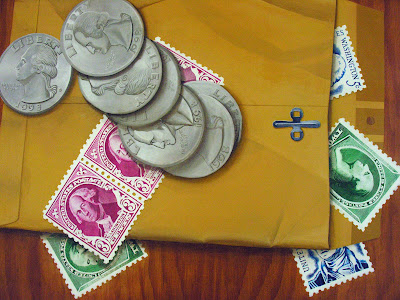